Home
Blog
Who Was Isaac Asimov And His (Science Fiction) Story

The most prominent writer in the field of science fiction from the period of 20 century as well as a professor was Isaac Asimov. Many works, books, and titles known and respected worldwide marked his career and made him a proficient writer.

Even though he was best known for his important role in science fiction, he also contributed to other fields like astronomy, biology, literary biography, religion, and math.  His career was crowned with a lot of awards and accolades. For his best presentation, who was he and about his early life read below to get to know him better. 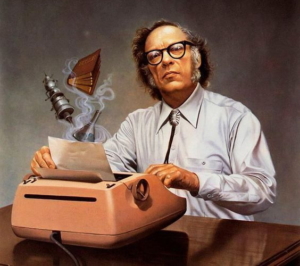 Born as Isaac Yudovick Ozimov on January 2 in 1920 in Petrovich, Russia, he was the first of the three children to his parents Anna Rachel Berman and Judah Asimov. He has a sister named Marcia (Manya), and she was born on June 17, 1922, and a younger brother named Stanley born on July 25, 1929. When he was only three years old, his family decided to emigrate in the USA. He has never learned to speak Russian because his parents have spoken English and Yiddish.

At the age of five, he was brave enough to teach himself to read, and in addition to this, he taught and helped his sister to read and speak as well. The Asimov (Ozimov) family had a lot of candy shops where newspapers and magazines were sold and were expected from their children to work there. One interesting fact for Isaac Asimov was that he has only eight years when he became a naturalized citizen of the USA.

With his 15 years, he graduated from high school and begun at Columbia University. He has received a scholarship in his high school days from Seth Low Junior College. His first degree was eminent in his life, and most important was the Bachelor of Science degree in 1939.

He got his M.A and a Ph.D. degree from Columbia University.  During his studies, Isaac learned French and German. His beginnings as a professor or an associate professor of biochemistry were in 1949 at the Boston University School of Medicine, where he began to work and continued his job to late 1970. In addition to this, he made more money as an author.

During World War II, he has a role working by a civil chemist at a Philadelphia Navy Yard’s Naval Air Experimental Station for a period of three years from 1942 to 1945. An important fact here was that Isaac was afraid of flying, and he flew only two times in his life. The first time was when he was working at the Naval Air Experimental Station, and his second time was when he returned from Oahu to home in 1946.

He was married to Gertrude Blugerman, who was his first wife and together had their two children David (1951) and Robyn Joan (1955). In his second marriage, he married Janet O. Jeppson.

An important and prominent professor, author, and writer who was an amazing speaker was Isaac Asimov. He was reading pulp magazines that were sold in his family’s candy store, and from that corner towards, he became a fan of science fiction and indicated to his father that what has “Science” in his title was far more educational.

Even though he worked as a professor at the University, he enjoyed writing science fiction stories. One of his first stories was obviously a great one and was immediately published in Amazing Stories in 1938 titled “Marooned Off Vesta.”  His first book, published in 1950, was the famous “Pebble in the sky.”

The same year would be productive because it would be the year when the story collection “I robot” came to be published. It is a summary of nine short stories that are connected and explains the problem with ethical programming, and there were created and explained the ”Three Laws of Robotics.”

“Foundation” was his collection that came in 1951. With this famous work, he won an award named Hugo Award for the “Best All-Time Series,” and it was in 1966.

Asimov, the prolific author, except working as a professor at University, and an author, wrote mysteries as well as fantasy. Many of his unique stories and titles that marked his whole life not only his career are “Asimov’s Guide to the Bible” that was published in 1969, “The Human Body,” published in 1963 and the mystery “Murder at the AB A” 1976. He is the author of his autobiography “In Memory Yet Green,” published in 1979.

He had a tremendous impact on the tattoo culture in general. Maybe not directly as an artist but definitely as an inspiration for a lot of tattoo artists around the globe.

Isaac Asimov died in 1992 in New York on April 6. The reason for his death at the age of 72 was kidney and heart failure.