The signs of the Zodiac are a common inspiration for amazing tattoos, particularly for people who are tattoo lovers.

Here, we are going to talk about the sign of Gemini. 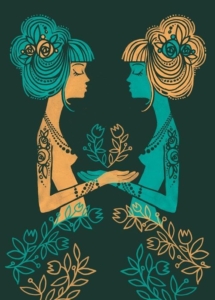 Gemini, which is the third astrological Zodiac sign, originates from the constellation of Gemini. Under the tropical zodiac, the Sun transits this sign between about the 21st of May and the 21st of June. The twins Castor and Pollux represent Gemini, and they are known as the Dioscuri.

Gemini is the constellation of the Zodiac. It was also one of the 48 constellations which Ptolemy, who is an astronomer from the 2nd century AD, described. It remains one of the 88 modern constellations nowadays. Its name is Latin for “twins,” and it has its association with the twin’s Pollux and Castor in Greek mythology.  The symbol of Gemini is ♊.

The constellation Gemini is between Taurus and Cancer constellations. The Sun resides in the astrological sign Gemini from the 20th of June to the 20th of July each year. By the middle of August, Gemini appears along the eastern horizon in the morning sky before sunrise. The best time that you can observe the Gemini constellation at night can be during January and February. By April and May, the constellation will be visible soon after the sunset in the west.

The easiest way to locate this constellation is to find its two brightest stars Castor and Pollux, eastward from the “V” shaped asterism of Taurus.

In Babylonian astronomy, the stars Pollux and Castor are called the Great Twins. The Twins also became minor gods, called Meshlamtaea and Lugalirra, which means “The one that arose from the underworld” and “The Mighty King.” In Greek mythology, Gemini has its association with the myth of Castro and Pollux, the children of Leda and Argonauts both. Pollux was the son of Zeus, the one that seduced Leda. Castor was the son of Tyndareus, who was the kind of Sparta and the husband of Leda.

Gemini, the twins, the third Zodiac sign, generally symbolizes human contact and duality like children holding hands. However, others use a man and a woman, or as in the Coptic Zodiac, a pair of lovers.

Some positive traits which the people born under this sign have traditionally include skill at communication and intelligence. However, there are negative traits too, and they include a tendency toward gossip and also inconsistency.

Gemini is an air sign. Its ruler is the planet Mercury, which explains why the people with this sign are energetic. Gemini constantly finds its use in tattoo art.

The reason why Gemini tattoos are really popular is that they are elegant and carry various meanings. For example, for a woman, the tattoo may signify fertility. Females may get this tattoo as a blessing or for good luck when they desire to have children.

Gemini also finds its close association with female strength. Because of that, for women, particularly Gemini zodiac tattoos are very symbolic.

As boredom is one dominant part of your personality, your energy constantly changes and evolves into something exciting and new. Finally, as you are hard to pin down to any one category, you tell that you are mysterious and enigmatic. These are some of the things the tattoo is about, and this is what it will say about you.

If you are a Gemini, then you identify yourself with some of these personality traits:

These are the personality traits that you can also use to give meaning and symbolism of your Gemini tattoo design.

Although a lot of ladies apply these tattoos, they tend to be more masculine. They have positive meanings too. There are some symbols and items which find their association with this sign. They include metal, flower, stone, and color.

The Gemini sign is going to be the symbol of a lot of things, such as nervousness. The wearer could be tense about something in life. It could also be the symbol of a charming character. Other meanings would be that the wearer is intellectual and curious. It will even symbolize a childish character that is immature, in rare cases, however.

All in all, the Gemini tattoo design is an excellent one in every case possible. You can use it on its own, or combine it with other things and objects, in order to add meaning to it.