In geometry, a triangle represents a polygon with three sides and three angles. Even though the triangle symbol is a simple one, it is loaded with deep meanings and seen very frequently in new school tattoo designs. Triangle as a tattoo symbol is used mostly in Geometric or Dot work tattoo designs, combined with single or other details. Before you decide to get a triangle tattoo, it’s important that you understand the meanings of triangles as they vary from type to type. 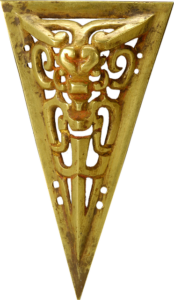 The meaning of Triangle Tattoos

The triangle is often used to describe the Christian faith because it contains three sides and three corners. The father, son, and the Holy Spirit are represented by each point of a triangle. This means that for the people of the Christian faith triangle tattoos represent a symbol of their faith and symbolize the Holy Trinity.

Moreover, the number three, which represents true wisdom and often connected to the ideas of a trinity, is represented by the triangle. It is possible for triangle tattoos also to represent other forms of trinities such as:

Another Christian symbol incorporating triangles is that of the Eye of Providence, also known as the all-seeing eye. This tattoo is depicted as an eye inside a triangle and is often surrounded by rays of light. The Eye of Providence is a symbol seen to represent God pays attention to everything we do. Some people get a triangle eye tattoo (Eye inside a triangle) to remind themselves of this no matter where they are in life.

According to the Celtic culture, the triangle is featured in the form of Triquetra, Triskelion.  Triskelion is a trilateral symbol consisting of three interlocking spirals. It is also called the Spiral of Life. The Triskelion symbolizes motion, movement, and a journey through life in order to reach the spirituality of genuine understanding or enlightenment. The Celts believed the three spirals represent the Celestial world, the Mortal world, and the other world.

The triquetra is also known as Trinity Knot or Celtic Triangle. The symbol represents different meanings in different cultures. People believe that the symbol could be associated with the Celt Moon goddess or another Celt goddess called Morrígan. It’s very common in Ireland that couples get matching trinity knot tattoos before they get married.

Valknut is a Viking symbol consisting of three interlocked triangles. The Viking warriors used to carry the symbols believing if they died on the battlefield, the Valkyries would take their bodies to Valhalla, the paradise for the Vikings. In a tattoo design, these three interlocking triangles symbolize the passage of bravery in the beyond.

The Star of David represents the symbol of Judaism. The star consists of two interlocking symmetrical triangles forming a hexagram. In Hebrew, it means the Shield of David. The Jewish meaning of the Star of David is that this six-sided figure symbolizes that God rules over the universe and protects us from all six directions: north, south, east, west, then up, and down with the middle – the hexagram – providing the spiritual dimension.

For instance, when the triangle is pointing upwards, it symbolizes:

When the triangle is pointing downwards it symbolizes:

3 Triangle is a Norse symbol known as Valknut. It is a symbol of three interlocked triangles. Instead of having one triangle, people sometimes have three triangles in their tattoos to represent each element of a trinity individually. There may be some symbolism associated with it, but at the end of the day, a tattoo means what you want to mean it.

In most double triangle tattoos, the triangles are overlapping each other, and depending on the directions of these triangles, and the meanings change as well. In the case when both triangles are pointing upwards, then it is called the fire-in-fire tattoo. If they are both facing downwards, then it is called water in water. When one triangle is pointing upwards and the other downwards, it can also be called a fire and water tattoo or represents two polarities.

Matching triangle tattoos are trendy among families and couples since they represent unity and love. Designs of matching triangle tattoos are very modern and hipster. People used to carry a photo of their loved ones or wear matching friendship necklaces or bracelets to show how much the other person means to them. Similarly, a matching tattoo is a great way to do the same, and you get to choose or create the design of the tattoo and carry it always with you.

The triangle tattoo can also symbolize creativity, harmony, ascension, proportion, manifestation, integration, culmination, and change. The most popular choice of these triangle tattoo meanings is creativity since most people want to be unique and have the ability to do provide something different in their jobs and their personal lives. It is essential to remember that your tattoo is your philosophy and the meaning of triangle changes by its orientations.