When Europeans brought African slaves into the Americas, those slaves brought with them their religion. People from the Kingdom of Dahomey were known for practicing something called Vodun, which evolved into many different associated religions in the New World, which we collectively call Voodoo. Voodoo is mostly recognized for its use of the voodoo doll. Along with that, some magic symbols associated with it that work well for voodoo tattoos. If we go into a little more detail about this expansive religion that has found its home in the American south and the islands of the Gulf of Mexico we can notice that Voodoo makes use of voodoo dolls and magic symbols that have become a trendy subject matter for voodoo doll tattoos

The voodoo doll originates from Louisiana, which was influenced by cultures that used the Mississippi River. This practice of making voodoo dolls to place a curse or ward off evil spirits goes back in the past even before the religion had crossed the seas. At that time, there was a tendency for a family to make a statue to house a spiritual enemy. This is the reason why it is common for the doll today to represent family, safety, protection, guardianship, and high power. Even though the doll offers protection for the wearer, many warn that the power of the doll should not be abused or taken lightly.

The Meanings of the Voodoo Dolls

If you are a person obsessed with black magic and the idea of being able to cast spells on others, the voodoo doll tattoos might be the perfect choice of design for you. The doll is not only able to ward off evil, but at the same time, it can also attack evil if instructed.

Today this doll represents pain and curses. Many choose to show their doll being impaled with pins or knives, which will, in turn, cause significant discomfort to one’s enemies.

By placing these items impaling the doll, it represents that this person does not forgive easily, they plot revenge, and they are not willing to compromise when attacked. 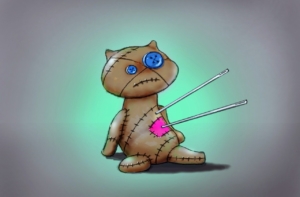 The Symbols and Ritual Tools

I regard to the voodoo doll tattoos, and many wearers like to enhance the visual appeal by adding in some ritual tools and symbols. These symbols are not only used to make the image more appealing, but they also come with added meaning that can change the overall theme of the design. Very similar to the different branches of witchcraft or shamanic religions, the use of stones, swords, and wands have a crucial role in the imagery of exceptional tattoo designs.

For people who possess such tattoos, the dolls and the ritual tools are symbolic of a person who no longer wants evil in their life, someone who is telling others to steer clear, or one who is looking for added protection for themselves and their families.
Nowadays, the popularity of the voodoo doll tattoos is growing as horror films become part of the mainstream media and attract a new audience each year. A large number of people are simply drawn to the neat designs and do not associate the design with the ancient tradition or rituals. They just like the bones, skulls, fire, axes, swords, and pins to make their design more intimidating. People, who are only interested in a little voodoo flair, or for shock value, design the image in ways that can put fear in those who are close enough to cast their eyes upon the voodoo doll.

If you want to get a voodoo tattoo, you might want to include some of the more magical components. These voodoo symbols are much more accessible and common in Haitian Voodoo. There are many artists who create designs specifically meant for magic effects. One such design is a variant of something called a Legba. These Legba stand as a connection between our world and the spirit world, and communication between the two often starts there. The presence of both beneficial spirits made up of all of your predecessors, as well as negative spirits that lead their own lives, is a common voodoo belief. Tattoos are often believed to be imbued with magical power, so there are even some symbols meant to protect the user from the possession of evil spirits or call for help from those Ancestors. The guardian of this knowledge is known as Gran Bwa, who is a spirit associated with Mapou trees. He also guards all things, including magic, secrets, and healing.

Voodoo tattoos and concepts are not only representations of just one culture and religion. There were hundreds of tribes in northern Africa when the American slave trade began, and every one of those tribes had very distinct traditions. Even the collection of different cultures that we call Voodoo has several distinct types. When getting a voodoo tattoo, you are the only one who decides its significance and meaning since it is a representation of yourself and your spirituality, and whatever purpose you give to it is the meaning that will stick.