One of the most popular tattoo designs is inevitably the skull since from all the skeleton parts, and the skull is uniquely human. There are a lot of different skull tattoos with a different meaning, depending on how the skull is used. For instance, a human skull with large, gaping, eye sockets can look very visually striking. Nevertheless, the skull has been regarded by most cultures as a symbol of death. A Skull tattoo could be used to show that the wearer has no fear of death.

A skull tattoo could symbolize the acceptance of the wearer of his mortality, and that is pretty cool. They could also be used to remind the wearer that they will one day die and should, therefore, live each day to the fullest. Thanks to this association with death, these designs can also be an excellent choice to commemorate the death of a friend or loved one. Some of these designs can be made to look quite scary; however, colorful skull tattoos can be quite the opposite.

There was a time when skull tattoos were worn by a specific type of character who wanted to project him or her as a dark person. Frequently, skull tattoo designs are used for prison tattoos and gang tattoos. A large number of bikers wear a skull design as a talisman to protect them from death. From an artistic stance, however, skull tattoos can be beneficial tattoo designs both on their own and when combined with other imagery with endless possibilities, like, for instance: Animals, Dice, Playing cards, Flames, Flowers, Banners, Weapons, and Wings. These tattoo designs can be very versatile, and a talented tattoo artist should have little trouble making a design to fit anywhere on the body. They can also be combined with other styles. For example, a detailed skull art design with a tribal tattoo background can look very striking.

A Skull tattoo design can be an excellent choice for men wishing to show they have no fear of death or have accepted that it is inevitable, but at the same time, women might choose one for similar reasons. You could make a skull tattoo design to look more feminine by giving it heart shape eye sockets.

The Day of the Dead, also known as El Dia de Los Muertos in Spanish, is a festival in Mexico where skulls play an essential part. During this day, families gather to remember their departed. As part of the celebration, beautiful skulls are made from sugar and candy and eaten by those who celebrate. As a homage of this festival, many women choose sugar skull tattoo designs which can be decorated with colorful flowers and look visually stunning. 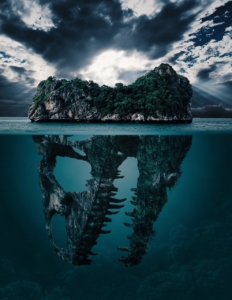 Skull tattoo designs are unique and can be worn almost anywhere on the body. A talented tattoo artist should have no problem to draw you a design to fill nearly every area and amount of space desired. Skull designs also look great both on their own and as part of a much larger design. Very often, by combining skull tattoos with roses or flowers and adding color to contrast with the skull, and we can slightly soften the menacing aspect of the design.