History cannot point out one reason why tattooing held fast over the course of humanity; one of the reasons why tattooing persists is to signify a warrior. The tradition of tattooing is a mainstay in American and British military history from the Revolution to today.

This age-old practice of tattooing can be found on mummies, which date as far back as 4000 B.C. Some cultural anthropologists attribute the spread of tattooing or body-marking culture to a variety of human traits, which range from religion to magic, as well as to experience and memory. 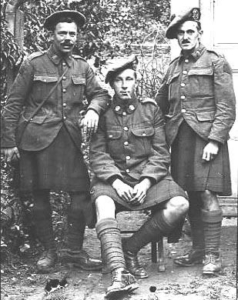 Outside of the religious or ancient ceremonial trends, particularly among tribal people around the world, the connection of the body with patriotic sentiments was, for centuries, a motivating factor in perpetuating the art of tattoo among warriors and soldiers. Moreover, some anthropologists also argue that early tattooing was a form of therapy.

For example, in Western culture, tattoos find roots in the Roman Empire. Roman soldiers were tattooed with permanent dots – the mark of SPQR or Senatus Populusque Romanus and used as a means of identification, as well as membership in a certain unit.

The Greek word Stizein meant tattoo, and it evolved into the Latin word Stigma, which means a mark or brand. Typically, tattooing was connected with some lower classes, such as criminals, slaves, and gladiators, as well as with Thracian infantry.

Therefore tribe warriors of the British Isles accept the art of tattooing. Picti people of Caledonia or now Scotland, for example, were known as “the Painted People” as a result of their tattoos.

One interesting tattoo among soldiers and warriors at that time was the B.C. or “bad characters” tattoo, which is an example of the attempts of authority to brand certain people or penalize them. Somewhere during the 19th century, soldiers from the British Army deemed “bad characters,” and they had a “B.C.” tattooed on their wrist.