Home
Blog
Crime And Punishment In Japan With Tattooed Faces And Arms.

Tattoos are part of fashion and are something we see every day in the street. Some people have very impressive designs that tempt us to have tattoos too. We see some Kanji characters on the body of people, and usually, they are only “Kanji-looking” characters. People often consider Japanese tattoos as arts, and many westerners find them fascinating. However, in Japan, despite the tattoo fashion boom from recently, people still have a wrong impression towards Irezumi. Why is that so? 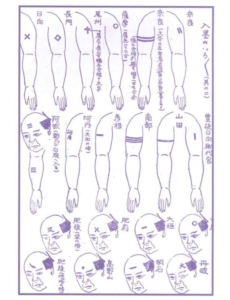 Japan actually has a very old tattoo culture, probably since the Jomon period. The gorgeous Japanese tattoos that we now know appeared in the middle of the Edo period. During that period, a lot of people came to big cities like Edo and Osaka. With population growth, the number of crimes naturally increased.

People introduced Irezumi as a punishment as of its character that is not just easy to get rid of. From there on, it spread among prostitutes, construction workers, gamblers, and couriers as a fashion.

They tattooed criminals on their forehead so that others could see they committed a crime. Also, each region had its own symbol, and by the Irezumi, people could tell where those guys committed the crime.

Japan really has had a very complicated relationship with tattoos over its history. Unlike in most western countries where tattoos are considered only a form of expression or drunkenly poor decisions, the Japanese society generally looks down upon the modern body art. This happens despite having some of the best artists and techniques in the world.

The go-to-form of punishment for the non-violent crimes was a tattoo right in the center of the forehead. Called a “tattoo penalty” or “Irezumi Kei,” people received it for relatively minor crimes such as burglary and theft. People classified it as a type of corporal punishment, along with caning.

Usually, expulsion from the area accompanied the tattoo penalty. It served as a deterrent because of the pain of getting your face tattooed. Moreover, it publicly displayed criminals for the rest of their lives.

Moreover, it had a record keeping purpose. The style of tattoo is different in each region individually. In this way, people could know in what area the convict did the crime.

These are the most common placements of face tattoos:

The most interesting one is the Hiroshima prefecture. Every time someone committed a crime, they tattooed another line. Hiroshima is simply doing that. The first time the criminal gets one line across the forehead. Then, the second time he gets a line across the first one. The second line is a little carved towards the left. The third time, they add another line on the right and a small dot on the right shoulder of the first line. This is the character of a dog in Japanese.

Another part of Japan gives tattoos on the arms of the criminals. A lot of them are simple lines around the arm.

Later on, tattoos became the symbol of fashion, showing love for someone, and toughness in the brain of Japanese people. They unconsciously kept this old custom about tattoos. In fact, a lot of public swimming pools and baths do not allow customers with tattoos. This is because other customers may believe that the person is a criminal or part of a Yakuza family.

Tattooing in Japan happened for the first time during the Jomon and Yayoi periods. During this time, people believed that tattoos have mystical importance. After that, the culture moved away from tattoos well until the Edo Period. During this period, it came back in a very different way.

During the Edo Period, there were no prisons until the development of large cities like Osaka and Edo (Tokyo). This leads to an increase in crime, and before then, amputation of the ear or nose was the punishment.

During 1745, tattooing replaced amputation as society became less blood-thirsty and gentler. This continued happening over the years with the face tattoos changing to the less embarrassing arm tattoos.

In 1872, the newly-established Japanese government abolished the tattoo penalty once and for all. Oddly enough, right in the middle of everything, around the early 1800s, body-art became all the rage suddenly. This happened among the ordinary people of Japan. With the number of people who are sporting tattoos in the streets of Japan nowadays, we might see another come-back.

Although this practice sounds terrible, we have to remember that tattooing criminals replaced other barbaric practices. Such practices were amputation of ears and noses, limb removal, and so on. This makes the idea of tattooing criminals seem pretty right and compatible.