Usually, cancer goes undetected until its advanced stages; when treating it becomes very difficult, and the outlook less promising. However, researchers from Switzerland are developing an implant that could alert the wearers to the presence of cancer early on.

In recent times, the media was inundated with the news of smart tattoos, which were developed by some researchers at Harvard University in Cambridge, MA.

These tattoos help in monitoring the health with the use of bio-sensitive ink, which changes color following the modifying composition of the interstitial fluid of the body. 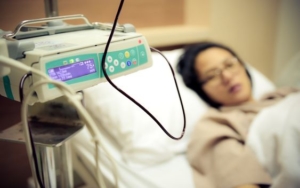 Now, Professor Martin Fussenegger of the Department of Biosystems Science and Engineering at Eidgenössische Technische Hochschule Zürich in Switzerland, together with a team of researchers, developed the prototype of another “tattoo” of that kind for a precise aim: to detect the possible presence of cancerous cells early on.

There are numerous types of cancer diagnosed too late, which diminish the efficacy of treatment and might mean that people are probably not going to see positive long-term health outcomes. On the other hand, early detection of cancer will increase the chances of survival significantly.

The biomedical tattoo of the team of researchers is set to recognize four of the most widespread types of cancer, which are usually detected late, and they are breast, lung, prostate, as well as colon cancer.

The implant consists of a series of genetic components that are incorporated into the body cells. Once when inserted under the skin, the implant will have the ability to monitor the blood calcium levels, as in the early stages of cancer development, the levels of cancer become super-elevated, known as hypercalcemia.

When these levels spike abnormally, melanin – the natural pigment of the body – would ‘flood’ the genetically modified cells, in that way making them look like a brown mole. In that way, the wearer will be alerted very early of any telling signs of cancer. However, the mole does not mean that the person is going to die soon – the person should take it as an early sign, which alerts them to check their health status.

The test conducted on mice and pigskin so far confirmed that the implant is reliable as a diagnostic aid, but it also has some drawbacks. The main problem is that it does not have a long shelf life, so it would have to be updated from time to time.

Another thing is that the implant is only an early prototype, and there is much more research has to be done on the subject before it can be tested on human beings. The way of making the biomedical tattoo available for use is quite long, as well as difficult.