Home
Blog
History of Japanese Tattooing: What is Irezumi? Part 1

Tattoos are a part of fashion, as well as something we see every day in the streets. A lot of people have very impressive designs that tempt us to have one on our bodies. Japanese tattoos are usually considered as arts, and a lot of westerners are fascinated about it. But, in Japan, despite the boom from recently about tattoo art, people also have a bad impression towards Irezumi. What is Irezumi?

Japan is a country with ancient tattoo culture, probably since the period of Jomon, and the gorgeous Japanese tattoo, which we now know has been established in the middle of the Edo period. During that time, a considerable number of people moved to big cities like Edo, now Tokyo, and Osaka. With that, the population growth, as well as the number of crimes, naturally increased. At that time, Irezumi has been introduced as a punishment as of its character, which is not easy to get rid of. From then on, it spread among prostitutes, gamblers, as well as construction workers and couriers as a fashion. 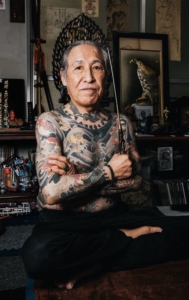 The criminals were also tattooed on their forehead so that people can see that they committed a crime. Additionally, each of the regions had its symbol, and by the Irezumi, people could tell where the criminals committed their crime:

The most curious of these cities is Hiroshima. Each time when a person committed a crime, they tattooed another line. Here is what Hiroshima did: The first time when the criminal gets one line across the forehead, the second time a line across the first one, a little curved towards left. The third time, they added another line on the right, as well as a small dot on the right shoulder of the first line. This is a character of dog or Inu in Japanese. We have no idea why they chose this character, but surely, carrying the letter “dog” was embarrassing.

Another part of Japan gave them a tattoo on the arms of the criminals. A lot of them are just simple lines around the arm. These were the Kishu’s, today Mie and Wakayama prefecture tattoo.

Even though later, Japanese tattoo was a symbol of fashion, toughness, as well as showing love for someone, somewhere in the brain of the people in Japan, unconsciously stayed the old custom about a tattoo. A lot of public swimming pools, baths, and natural spa did not allow customers with a tattoo. This is as other customers may think that those people are criminals or a part of the Yakuza family and get scared.