A tattoo is a reflection of your style, as well as who you are as a person. It is going to be with you your entire life, so you would like to make sure that it means something special to you. Tattoos can evoke a range of reactions from interest, astonishment, reverence, and admiration to aversion and fear, for example, cross tattoos. They are met with open mouths or frowns, and their bearers are judged or misjudged, awakening fear or desire. 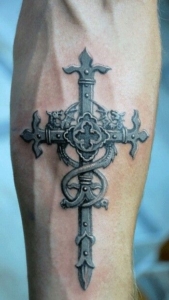 However, tattoos maybe a piece of art or a disgrace to the bearer, and his or her family, when it is done incorrectly.

But, remember that getting a tattoo is going to be an excellent experience if you go to the right studio and if you put some thought into your idea of what you want, and not just get the first thing which will come on your mind.

Here, we are going to present to you the ten interesting tattoos related to different crosses, and we are sure that you will definitely like some of them, and maybe choose some for your next new piece of body art.

The so-called crossed cross is a symbol of world evangelization. It is important for the Latin crosses, all of them touching at their bases, forming one larger cross of equal lengths overall. Here, the compass aspect of the symbol of equal lengths is exploited, with the small crosses which radiate out in the four directions.

Said, the crux gemmata is the gemmed cross, and it is also a Christian, albeit, opulent, symbol, stubbed with gems along both axes. In some forms, the gems number thirteen, in that way representing Christ and the twelve apostles – arranged five across and nine down, sharing one gem.

The cross with arms of equal length, which looks exactly like the “+” sign, is probably the oldest form of this symbol. For example, in Europe, it was found in prehistoric cave art. In ancient North America, It may also be connected with the four directions, while in the earliest Chinese writings, it was a sign of perfection.

From an astrological point of view, this is a sign of physical matter. Together with the circle, and many times united with it, this symbol of equal lengths is one of the most common of the basic symbols. In logic, as well as mathematics, this cross is a sign that unites, while its cartography it separates. It also used to mean ‘positive’ in different cultures.

The cross of Golgotha – Hebrew for ‘skull’ – is also known as Calvary, a Latin word for ‘skull,’ is named after the place where Jesus has been crucified – a hill outside what was then the wall of Jerusalem. The single difference between this symbol and the Latin one is the small, three-tiered pedestal on which it is standing. The three steps, growing smaller in size at the top, were also said to be symbols of hope, faith, and even love.

It is the symbol of the Christian faith, as are more of the crosses, and it was a favorite one on the Coat of Arms for crusader knights, not surprising in that their campaigns centered on Jerusalem. Even though it is not utilized in tattoo imagery per se, its form is reminiscent of the one of the Rock of Ages tattoo.

Philip is one of the twelve apostles, and its symbol is a Latin turned on its side. He has been martyred at Hierapolis of Phrygia on a cross in this position.

Again, although this symbol type is utilized in tattoo imagery in isolation, it is part of different flag designs, particularly the Nordic countries, and it also finds its way into tattoo symbolism with these sorts of patriotic tattoos. Just like with the Latin cross, the symbolism is connected directly and overtly to Christianity.

This symbol is almost the same as the Cross of Golgotha, with the addition of another cross member, a smaller and above the leading crossing member, as though for emphasis of a higher rank. Such attention symbolizes the higher order of the arch or ‘chief’ of angels. While ordinary angels are protectors of the ordinary people, the archangels protect the religion.

This is a standard Latin cross, but with three horizontal beams, each of them successively shorter, the higher it appears. The three rays represent the triple role of the pope as the highest priest, or teacher, or chief shepherd. He is also considered the representative of Christ on earth, a co-ruler of earth, heaven, and hell.

This symbol or orb is a symbol of Christian evangelization and for a kingly rule. Roman emperors had utilized a globe topped with the goddess of victory. She has been replaced with the Christian one by the Byzantine emperors. In Christian art, this is sometimes going to appear atop a scepter held by Jesus Christ, combining both of the traditional uses.

This is a Coptic tattoo design which is based on a woodblock stamp, and which combines several symbols into one. The main symbol has a bar at the end of each arm, with similar small crosses in each of the quarters, better known as the Jerusalem cross. The three crowns stand above the symbol, and a star stands above the center crown, with its lowest point stretched downward.

At the bottom of this design, there are two branches joined with a bow. Unlike any other tattoos which denote pilgrimage to Jerusalem, this is a design that symbolizes a pilgrimage to Bethlehem – the three crowns stand for the three wise men. The star stands for the star of Bethlehem.