Home
Blog
Origin And Meanings Of The Autism Awareness Tattoos

Autism tattoos are prevalent today, and there are many reasons for this, but the main one is because more people are becoming aware of this condition. By definition, Autism is a neurological disorder with no known cure, and it affects speech and motor skills. Based on the statistics, close to two out of every one hundred children have this disorder. These tattoos are one of the ways that parents and relatives or even friends of children with this condition can illustrate support. Instead of just waiting for that one day in a year devoted to expressing your support for autism acceptance, choosing to get inked indicates that you honor people leaving with the condition all the time.

Origin of these Tattoos

These tattoos have only been around for a couple of decades, and so they do not have a long history like others. The percentage of people living with Autism has increased significantly over the years, but this is mostly because of the growing awareness.

And it means that parents no longer have to hide or confine their children in the house. An increase in the number of autism cases is what gave rise to these tattoos. Since the 1980s, most countries in the world have dedicated a day for Autism, which is April 2nd in most nations. Within this day, people proudly wear a brightly colored and puzzled ribbon to show their acceptance of people with this condition.

The increased awareness of this condition brought about the autistic condition with some parents and loved ones pushing for the government to find a cure. Another school of thought is pushing for people with the condition to be acknowledged not as individuals with a disorder but just different.

These people are those who came up with the autism tattoos to show that they do not only support autistic people on April 2nd but throughout their life. At the begging, it was just the ribbon, but now there are many variations, but all still maintain the puzzle and bright color theme.

Very similar to most other tattoos, these also have a blanket or universal sense. These tattoos represent a sign of support for people living with Autism all over the world. It is also an indication that you understand what they are going through, and you love them just the way they are. 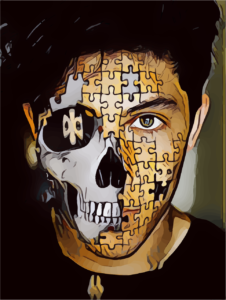 Though there are other specific meanings that one can connect with these totems, and they will depend on the type that you have and also the reason why you have it. Several people may even have this body marking just because it looks stunning and not necessarily understand what it means.

An autism tattoo is very private, and the men and women out there who have them want to demonstrate the world the situation they are dealing with or what they are going through in their lives. The standard tattoo with a ribbon and the bright puzzle pieces (mostly blue) is intended to raise public awareness on this lifelong disorder.

The majority of people know little about this condition. So the puzzles in the tattoo illustrate the diversity of individuals with Autism, while the bright color of the ribbon is a symbol of hope for autistic people. For parents or relatives, the tattoo can also represent solidarity with a loved one and express the concern that he or she can recover like in a few cases in the past.

The designs of the autism tattoos differ a lot, but most of them center on the symbolic puzzle. These totems can be either in one color or multiple shades, and this will depend on the person getting inked and also the meaning that they want it to convey.

The ribbon is also standard in many variations as it propagates awareness for the condition. A ribbon with an inspiring quote is a wide variation of this totem, and some people also substitute the quote with the names of the particular person who has Autism.

Some ladies will also ink a butterfly with the puzzles in it as this is not only pretty but also a symbol of femininity. A puzzled star is also trendy with ladies, and this is because it also holds other meanings, such as the universality of this condition.

The key and lock are other preferred designs of this tattoo that you will see with mothers and other relatives who have someone very dear to them who has Autism. Other people who have a preference to add a fun element to their tattoos will go for a cartoon character such as Mickey Mouse with puzzled ears to show their support for autistic children.

Why Should You Have One?

The most apparent reason why you should get this tattoo is to demonstrate awareness and support for every person in the world living with Autism. You do not have to wait for that one day in April to express your help, but you should instead have a tattoo that will show your acknowledgment of the challenges that autistic people go through trying to do the usual things that most take for granted.

These tattoos are also adorable, and the puzzles make an interesting pattern, and this makes them a perfect option for the conventional meaningless body markings. And the good thing is that you can attach the model to almost any other tattoo design to give it more meaning.