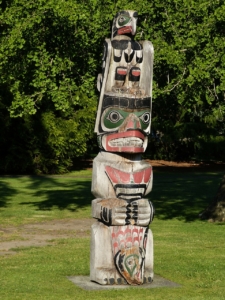 What’s interesting about tribal totem tattoos is that they often honor what’s in the design rather than just focusing on the meanings attached to those images. You have to remember that when totem poles have first created some animals were seen as some of the top spiritual beings, so there was no need to attach additional meanings to them. What’s great about this is that if you happen to have a favorite animal for any reason, chances are you can turn it into an amazing totem tattoo.

There are quite a few different totem tattoo styles, but for the most part, the designs don’t change the meanings in the content. For example, a very colorful totem design will usually not have more meaning than the same design done in black and gray ink.

Below, there are some of the most popular totem tattoos and the meanings attached to each of them.

The snake is definitely the animal that you’ll want to choose if you wish to your totem tattoo to represent transformation. This tattoo could mean that you are making significant changes in your life after some rough years, or it could mean that you believe people should always be changing. As far as design goes, you can have your snake coiled up in a circular shape on the totem, or you might opt to have it wrapped around the totem from bottom to top.

The eagle symbolizes vision, which is an excellent totem tattoo meaning for anyone who has a vision for their life and wants that extra motivation to stick to that vision. The eagle totem has more design options than most other animal totems out there. You can have the wings very large in the image, or you can even have them tucked tight to the sides of the totem. In most cases, people add ears to their eagle heads like in the classic tribal designs, though you can leave them off to give it a more accurate eagle look.

If you are looking for a totem tattoo that symbolizes loyalty, look no further than the wolf totem tattoo. This could mean that you take pride in being loyal to your friends and family, and it could instead suggest that you look for loyalty in others above all else. As you might expect, the focal point of the wolf totem is its face, which shows great detail and often shows the geometric lines that make up its face.

There are quite a few things that symbolize wisdom, but few are as well-known as the owl. This is a fantastic tattoo meaning for those who love to teach others or who feel that they have a lot of great knowledge to share. What’s interesting about the owl totem is that it looks more like the animal itself than most other animal totems. This might be because the owl has been revered a bit more than other animals throughout the centuries, or it could be because its natural shape just works that well in totem form.

One of the best symbols of strength, the bear totem tattoo, also can be one of the most attractive totem tattoos that you can get. If you have a lot of pride in being physically or mentally strong, this is definitely the animal totem tattoo you’ll want to look into getting. To emphasize the “strength” meaning, you can have the bear roaring in your design, though that isn’t necessary. You can also choose between having a realistic-looking bear or one that has a bunch of great tribal bands through it.

If you think your craftiness is one of your top traits, then the fox totem could be the perfect totem tattoo for you. Interestingly, you’ll find that many fox totem variations often just show the animal’s face without a full totem pole above or below it. These are usually very colorful tattoos that show off the vibrant personalities of these creatures.

If you like more than one of these animal totems, both for their looks and their meanings, you can very easily stack them in your design. That is a common practice among the tribes where these designs originated. The trick is to make them look great lined up on the totem pole. These are often quite detailed and complex that requires finding a good artist to do the work for you. Same as with other totem tattoos, these usually work very well as back or arm tattoos.

Those totem tattoos listed above are just some of the many that you can choose from, which can make the process quite challenging for some folks. You have first to figure out the ones that have meanings that work for you, and then you have to come up with a design that you’ll want to have on your body for the rest of your life. If you are not an artist yourself, you might actually want to hire one to draw some designs up for you. You want to make sure that you get precisely what you have in your mind, so don’t rush through this process.

As mentioned earlier, totem tattoos are designs that should be made by excellent tattoo artists. If you have decided that you are going to get a totem tat and you have a design in mind, be sure that you do some research and hire an artist who you think will make your totem tattoo come to life on your skin.