This kind of tattoos, ribbon or a bow, as much as they look pretty and are fun to draw, design, and decorate, actually carry on a very deep meaning. Depending on the color that the ribbon has, its meaning is usually awareness or sign of support for some health condition. 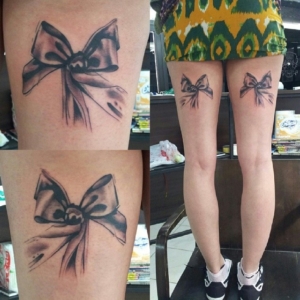 It is not defined when did the ribbons actually started taking roots into this practice, but it is well known that yellow ribbons gained their popularity while they were worn during the Civil War in America. All the women wore them to show the love for the close ones on the battlefield, and they still wear them in support of the military troops overseas.

The red ribbon is one of the most popular nowadays; it shows support and raises awareness for HIV/AIDS. Blue ribbon is against any type of bullying or abuse. Pink is popular for raising awareness of women’s health, especially accenting breast cancer. Green is against depression, and of course the black one, which is a general symbol for mourning.

It is not only the color that has a meaning in this choice of ink, but it is also the shape.
It’s sophisticated and yet controversial at the same time and embraced both by men and women, but there are several designs that are very gender-specific, like the bow ribbon for example that is usually tattooed on women only.

The tied up-bow ribbon tattoo most of the women find it most appealing and symbolic, meaning women power, tying up a loose knot, an ending, being pulled back or maybe even released. It is mostly associated with love.

It can be quite fashionable and cute, depending on the design and color, and the size varies depending on body placement. The most common area for getting his kind of tattoo is wrists and ankles.

Women tend to get these tattoos in vibrant colors or in addition to something. The design of the ribbon whether it is just itself or not depends on the creativity of the one getting it.

Additional to this, there are several more meanings of the ribbon:

Some type of text, some quote or maybe dates and names are often added to the tattoo, below it or in the strands. Sometimes there are even some religious verses from the Bible.

The basic ribbon knot, though it symbolizes female strength and power, there is an amusing number of men that actually tattoo it as a reminder of being able to overcome something, or not giving up.
The long type ribbon is mostly tattooed on the back of the neck, it looks classy and very beautiful. Most women tattoo it because it appears as if you are wearing a summer dress.
The ribbon in combination with red roses – which symbolize love, can mean a reminder that when something else fails, there is always love, or maybe even a loss of a love. Butterfly combination with a ribbon is special for women that are aware of their femininity, and not afraid to express it.

The modification of a ribbon can be made by choosing a slightly more challenging and innovative design like a corset, which is often tattooed on the back or the side. Back thigh bow tattoos are one of the most popular, since are considered sexy and promiscuous – for some unknown reason.

No matter the size of the tattoo, the design – whether it’s one color or not, polka dot or mandala, it’s always quite eye-catching. Girly and classy, or simple and elegant, they are a great way of expressing one’s artistic spirit.

Probably the best part about this design is that he is not connected with some specific style in tattoo art. Basically this can be done in all tattoo styles. Realistic, old school, sketchy or any other that you can think of. It’s a very flexible design that can easily go with old school rose and at the same time with heavy detailed mandala tattoo design. This is definitely an elegant tattoo design that is popular with both man and woman and it has esthetic and meaningful value in the tattoo world. This is a very specific tattoo design that can be sexy or decorative and still be a very strong and powerful design with a great meaningful story behind it.

In the end, we just need to be very careful about the choice of color and shape because as we said before they have different symbolism and we don’t want to end up with a tattoo that has no meaning for us.

Over the years and all over the world,