Sikhism is the religion and philosophy founded in the Punjab region of the Indian subcontinent in the late 15th century. Sikhs are the people who believe in this religion. These people call their faith Gurmat (Punjabi: “the Way of the Guru”). Sikh tradition claims that Sikhism was established by Guru Nanak (1469–1539) and subsequently led by a succession of nine other Gurus. According to Sikh’s belief, all ten human Gurus were inhabited by a single spirit. 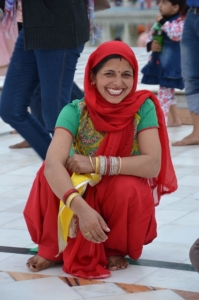 After the death of the 10th and last Guru Gobind Singh (1666–1708), the spirit of the eternal Guru transferred itself to the holy scripture of Sikhism. At the beginning of the 21st century, there were roughly 25 million Sikhs worldwide. The great majority of them were living in the Indian state of Punjab.

When translated, Sikh in Punjabi means “learner.” People who joined the Sikh community, or Panth (“Path”), were searching for spiritual guidance. According to Sikhs, their tradition has always been separate from Hinduism. However, many Western scholars argue that Sikhism was a movement within the Hindu tradition in its earliest stage.

A Sikh gurdwara consists of the house of worship proper and its associated langar, or communal refectory. The presence of the Adi Granth at the gurdwara is obligatory, and all attending must enter with heads covered and feet bare. Sikhs express their respect by bowing their foreheads to the floor before the sacred scripture. Worship entails singing hymns from the scripture, and every service closes with Ardas, a set prayer divided into three parts. The first part involves a declaration of the virtues of all the Gurus. The last part consists of a brief salutation to the divine name.

Neither of these parts can be changed. The middle part of the Ardas entails a list of the trials and triumphs of the Khalsa in a generally agreed form. The trials and triumphs of the Khalsaof were recited in clusters by a cluster with a fervent “Vahiguru,” which originally means “Praise to the Guru.” Nowadays, it is accepted as the most common word for God. After the end of the service, there is the distribution of Karah Prasad. This sacramental food consists of equal parts of coarsely refined wheat flour, clarified butter, and raw sugar.

The rejection of caste

The Adi Granth encompasses a forthright condemnation of caste. This means that there is no toleration of caste in its presence (normally in a gurdwara). The Gurus condemned caste as holding no significance whatsoever for access to liberation. Thus, in the langar, everyone must sit straight, neither ahead to claim higher status nor behind to denote inferiority. Indeed, the distinct Sikh langar originated as a protest against the caste system. Another signal of the Sikhs’ denial of caste is distributing the Karah prasad, prepared or donated by people of all castes.

However, in two areas of Sikh society, caste is still observed. It usually is expected of the Sikhs to marry within their caste. For instance, Jat marries Jat, Khatri marries Khatri, and Dalit marries Dalit, etc. In addition, Sikhs of some castes tend to form gurdwaras envisioned for their caste only. For example, members of the Ramgarhia caste identify their gurdwaras in this way, as do members of the Dalit caste.

The more significant percentage of Sikhs belong to the Jat caste, which is a rural caste. The Khatri and Arora castes are mercantile castes, and they both form a very small minority. However, they are very influential within the Sikh community. Other castes that are part of the Sikhs, in addition to the distinctive Sikh caste of Ramgarhias (artisans), are the Ahluwalias (formerly Kalals [brewers] who have raised their status considerably) and the two Dalit castes, known in Sikh terminology as the Mazhabis (the Chuhras) and the Ramdasias (the Chamars).

The 20th century to the present

The early 1920s is the period of the Akali movement. This is a movement by semi-military corps of volunteers raised to oppose the British government, disputed with the British over control of the larger gurdwaras (Punjabi: “doorways to the Guru”), the Sikh houses of worship, in Punjab. This conflict eventually led to the acceptance by the Legislative Council of the Punjab of the Sikh Gurdwaras Act of 1925, whereby the principal gurdwaras were entrusted to Sikh control. Ever since, the gurdwaras have been governed by the Shiromani Gurdwara Parbandhak Committee (Supreme Committee of Temple Management), an elected body that regards many Sikhs regard as the supreme authority within the Panth.