The origins of the symbolism of the black rose are lost in time, and some of its ancient origins are lost in the fairly green mists of time. For example, the Irish song “Rosin Dubh” or “Little Black Rose,” may have originated in the seventeenth century, as the Irish battled the English.

A black rose can be a sign of a lot of different things, such as hope, grief, rebellion, as well as death, being a few of its connotations. The black-and-white-rose tattoo designs look spectacular on the skin, with the black ink standing in stark contrast to any skin color. 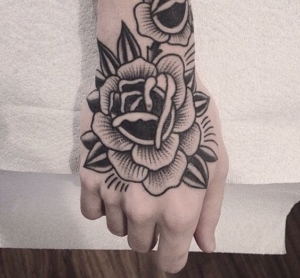 The tattoo of the black rose is a symbol of authoritarian groups, echoing this embattled history. In this context, the black rose is fundamentally a symbol imbued with sadness, strife, and struggle – tragic in its dark beauty, but not quite the symbol of death, as well as farewell that it has also become in North America, where the color black is often associated with death.

Black roses belong to the tattoo tradition, with sailors from hundreds of years ago receiving these beautiful tattoos as a type of memorable souvenir. Originally, they were a symbol of pursuit. Since they are impossible – and the ones sold as black roses are either dyed or a dark purple – tattooing a black rose to yourself means that you are pursuing the impossible. You were also filled with hope for some kind of miracle, be it a reunion or love or journey. From here, they also gained the meaning of grief. They are placed at a funeral as a sign of hope for the departed, but their meaning to the living remains one of death and grief.

As you can notice, the meaning of a this rose tattoo does not necessarily have to revolve around morose and morbid sentiments, although a majority of them do. They usually also stand for a sense of accomplishment, defense, as well as eternal hope. Apart from these, every person may have a different personal reason for getting one.