Home
Blog
The FDA Will Put Its Hands In The Tattoo World, Creating New Restrictions

The FDA has quite an interesting connection with tattoos. Tattoo ink is considered a cosmetic product, which makes it subject to regulation, but it does not have to be approved. However, it looks like the FDA has some new regulations which will come soon – much like the recent crackdown of the EU. The FDA things of cracking down as some inks allegedly don’t react well to laser removal, so there are tattoo artists that are outraged by this idea.

One tattoo artist and InMaster: Angels’ co-host named Nikki Simpson, created a post on Instagram in which she called out an issue which may cause some significant issues in the industry of tattooing. She wrote the following:

“The FDA (who is controlled itself by Big Pharma and controls Big Tobacco and the Fast food industry) is trying to put their hands in the Ink industry, claiming ink is carcinogenic when exposed to heat (laser removal) although there is ZERO medical evidence of it.” 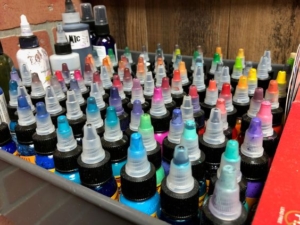 As the FDA site stated, the agency considers the inks utilized in intra-dermal tattoos, which include permanent makeup, to be cosmetics. This means that it may be subject to regulations, but it is not subject to approval at all – they are subject to pre-market approval under the Federal Food, Drug, and Cosmetic Act.

FDA also looks like taking a cue from the EU. The European Union recently proposed some new regulations from the European Chemicals Agency. The agency has some plans to challenge 4000 ingredients from the ink. They also believe that several ingredients react in a negative way with tattoo removal lasers and also create carcinogens.

Nikki also mentioned that all that started in Europe and is now making its way here. She says that the solution of the FDA, outside of trying to outlaw tattooing once again, is going to take every ink company and also reduce and dilute every ink into barely any traces of pigment, so they are going to eventually fall out over time and be easy to laser out.

However, the biggest problem which seems to appear with the proposed plans of FDA is that there is no evidence that tattoo ink reacts with lasers in a negative way. Moreover, they acknowledged that this is their consumer update: “Think Before You Ink: Are Tattoos Safe?” They wrote that they do not know the short or also the long-term consequences of how pigments break down after the laser treatment. But, they said they know that some tattoo removal procedures may leave some permanent scarring.

According to the update, there were also some adverse reactions to tattoo inks reported to FDA. However, the numbers are small compared to the number of people that get tattooed. From 2004 until 2016, the FDA received only 363 adverse event reports, which are about 30 per year.

There were also some complaints from consumers about a rise in their tattoo ink. However, this number is also small, as the agency received only five such between 1988 and 2003. So, there is a rise in the problems, but is it a result of the tattoo ink or the tattoo artist?

However, the regulated tattoo inks are not that terrible. But, those people that get tattooed and also go to licensed shops often do their homework.

Those that decide to get a tattoo are aware of the fact that there are some risks involved in this, too, because that is life, it is full of risks. When you regret a tattoo, there are some other options besides laser removal, and they are cover-ups or also tattoo removal creams.

Nikki said that with the new regulations, this would mean the end of their tattoo industry as they know it today. That is going to affect every tattoo artist, shop, suppliers, as well as thousands of families or TV shows which put tattooing in the home of a lot of people. It can also make the job of artists from their own hands, and this may be the only way they make a living.

There is another great chance that regulated tattoo ink may kill of vibrant pieces. It could limit the artist and his or her creativity. It could also make it so that tattoos don’t last forever.

According to the update, FDA also stated that people have to be concerned about tattoo ink, telling that some artists may use contaminated ink on their clients. They also claimed that some ink might contain pigments that are used in printer toner or in car paint too.

However, despite all this, the most important thing for you would be to make sure your tattoo artist is a licensed one and that he or she uses hygienic practices. Ensure that they cleanse their equipment between clients and that they also change the needles. Pay a lot of attention to their sanitation habits.