Thor tattoo design is gained popularity a lot these days. One of the main reasons for that is the movie industry that included him as the main or supported character in some of the biggest Marvel blockbusters in Hollywood’s history. Thor tattoo is a design with hard and powerful symbolism that holds a lot of history and mythology of northern Europe and its people.

Thor  (/θɔːr/; from Old Norse: Þórr, runic ᚦᚢᚱ þur) is commonly recognized as a hammer holding god who according to the Germanic mythology is associated with thunder, lightning, storms, sacred groves and trees, strength, protector of humanity and 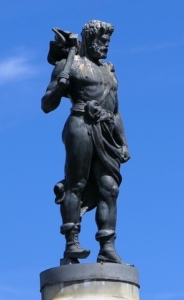 also hallowing and fertility. He appears not only in Old Norse Þórr, but extensions of the God occur in Old English as Þunor and in Old High German as Donar (runic ᚦᛟᚾᚨᚱ þonar). All forms of the deity originate from a Common Germanic *Þunraz (meaning thunder).

Throughout the recorded history of the Germanic peoples, Thor is widely recognized as a prominent god, going from the Roman occupation of regions of Germania to the tribal expansions of the Migration Period, that lead to his high popularity during the Viking Age, when, in the face of the process of the Christianization of Scandinavia, emblems of his hammer, Mjölnir, were worn and also Norse pagan personal names containing the name of the god bear witness to his popularity.

Because of the nature of the Germanic corpus, narratives featuring Thor are only attested in Old Norse, where Thor appears throughout Norse mythology. Norse mythology that is recorded mainly in Iceland from traditional material stemming from Scandinavia provides numerous tales featuring God. According to these sources, Thor carries at least fifteen names, among them, is the husband of the golden-haired goddess Sif, is the lover of the jötunn Járnsaxa, and is most often described as fierce-eyed, red-haired and red-bearded. Thor, the Germanic word for “thunder,” was a favorite god amongst the ancient Nordic peoples of Northern Europe. He is generally shown as a red-bearded warrior of great strength, wielding his famous hammer, a symbol of the lightning that accompanies thunder. Considered the son of Odin, the most significant deity in the Nordic pantheon, he was a proponent of humanity, a saving hero, and he achieved quite a bit of popularity.

Even in the modern period, Thor continued to be acknowledged in rural folklore throughout Germanic-speaking Europe. Thor is also referred to in place names, and even the day of the week Thursday bears his name (modern English Thursday derives from Old English Þūnresdæg, ‘Þunor’s day’). There names originating from the pagan period containing his own that continue to be used today, particularly in Scandinavia. Moreover, Thor has inspired numerous works of art and references to Thor to appear in modern popular culture. Very similar to other Germanic deities, veneration of Thor is revived in the contemporary period in Heathenry.

As previously said, he is the son of Odin and a god himself and is a popular figure in Norse mythology. He is most often portrayed with his famous hammer; and very similar to any other god, he is believed to be a protector of mortals. As a tattoo design, Thor tattoo is famous only among young boys and men due to the masculinity and vigor that are associated with him. Some boys prefer to have just a picture of the hammer, whereas some prefer to have a detailed image of Thor along with thunder. However, for an ultimate effect, this tattoo is required to be done by an efficient, professional tattoo artist.

The Meaning of Thor Tattoo designs:

The tattoo of Thor is immediately recognizable since he always bears the hammer and wears the traditional dress of a Viking warrior, notably the heavy helmet. He is also sometimes depicted riding over the clouds in a chariot drawn by two goats. They usually represent God as a red-bearded warrior of great strength, holding his famous hammer, and a symbol of the lightning that follows the thunder.
Considered to be the son of Odin, the greatest God of the entire Nordic pantheon and was a defender of humanity, he acquired great popularity even in the tattoo world. The tattoo designs that include Thor are easily identifiable due to his hammer and his traditional Viking warrior attire, especially the heavy helmet.
In some Thor tattoos, you can also find him in the clouds in a carriage driven by two goats.

In both Greek Mythology and comic books, there aren’t many weapons that bring more attention than Thor’s Hammer. Thor’s hammer, or Mjölnir, is known as one of the most damaging and coolest weapons of all the Greek heroes and comic book heroes. This being the case, it is no surprise that it is so popular with fans of the comics and the old stories.

Thor is the son of Odin and also recognized as the God of thunder. As we said before, He carries his magical hammer with him everywhere he goes, and when he throws it to an enemy, it returns to him like a boomerang. In Greek mythology, Thor travels in a cart pulled by goats, and he has a big beard. Neither of these is right in the comics, but they do have one thing in common, and that is the hammer. Because of the popularity of Thor’s hammer, many people choose to get tattoos of Mjölnir.

There are a lot of cool facts and stories about Thor’s hammer, and that is the reason why so many people are getting the tattoo.

There are a few different stories of Mjölnir’s origin, but one thing we do know is that Thor’s hammer wasn’t made in a regular forge. The most popular story about the origin of Thor’s hammer, and the one they use in the movie, is that the heart of a dying star was the location where Mjölnir was forged. However, there is more to the story than this. Dwarves blacksmiths named Buri, Brok, and Eitri were the ones who forged the hammer. In the comic books, the dwarves were commanded to make a powerful and deadly weapon for Asgard by none other than Odin himself. For the dwarves to accomplish this, they had to summon a magical forge from the heart of a star where they made the hammer out of Asgardian metal. The forging of Mjölnir was intense outside of being a magical process. Earth was almost destroyed in the process of making Thor’s hammer. In the Marvel comic books, there was an explosion after the creation of Thor’s hammer that was so strong; it caused the extinction of the dinosaurs on Earth.

Thor’s hammer is what makes Thor who he is. Without it, he was a much weaker version of himself and had to learn to be humble to earn the right to swing the hammer. Thor’s ability to conjure lightning, his ability to fly, and his armor are all because of Mjölnir.

Of course, Thor is a physical force, and he is very strong, but Mjölnir is what makes Thor who he is. This is the difference between Thor and many of his superhero counterparts. When Wonder Woman loses her weapon, she is still strong and capable to fight with the best of them. If Batman were to lose his gadgets, he could even survive using hand to hand situation. Because Thor is a minor deity, it isn’t easy to hurt him. However, his huge power is almost useless without the hammer, and that is why Mjölnir is such an essential part of who he is.

In Norse mythology, Thor’s hammer represents a symbol of protection, consecration, and blessing. Those who possess this tattoo might have it because they are a fan of the Marvel comic series or just a fan of mythology in general. Thor’s hammer tattooed on your body represents a symbol of power and a symbol of honor as well. Thor was the protector of Asgard, and with this tattoo, it can represent you being the protector of your home as well.

There are a few variations of Thor’s hammer tattoo designs, and there are a couple of them below. There are probably hundreds of ways to get this tattoo done, but between these examples, you should have a pretty good idea of the different variations of this tattoo.

The stories of Thor’s hammer are Norse in lineage, so those with the Norse heritage will sometimes get this tattoo as a way to honor the past. The intricate details of the Norse version of this hammer make this a beautiful tattoo that will get the attention of most onlookers.

It’s hard to imagine getting a tattoo of Thor’s hammer without Thor being in the picture. Often fans of the Marvel comic book series will tattoo Thor with Mjölnir on their body to pay homage to one of their favorite demigods/comic book characters of all time.

Thor’s Hammer Made of Electricity Tattoo

Since Thor can control lightning, Thor’s hammer tattoo is often engulfed in electricity, or there will be a storm in the background. A piece like this is commonly used as the main section of a sleeve tattoo because of the background.

You can get this tattoo in many styles, so figure out which tattoo artist you want to work with and let them create the tattoo of your dreams.

Thor, as a Marvel character:

In more recent times, Marvel comic book character Thor has gained more popularity thanks to the success of movies produced for theaters. This is the reason why a large number of people decide to get inspiration for a Thor tattoo design, particularly from this movie.

In the end, it’s not important which one you’ll choose. Thor and all of his assets are the things that you are looking for, especially if you want a design that it’s powerful, strong, immortal, and righteous.