Home
Tattoo History
Thor: The God Of Thunder And Lightning In Norse Mythology

The god of lightning and thunder was one of the most prominent and powerful gods in Norse mythology, whose name was Thor. He was considered as a role model of power and masculine and was known as the bravest of all warriors, wielding his hammer, Mjölnir.

Thor was another of Odin’s sons and a member of the Aesir tribe of deities. He had a lot of abilities, including the ability to command storms and rain and bring lightning and thunder. This deity was also known for his prodigious sexual appetite and his ability to impregnate women. Thor was also linked with fertility. He was often portrayed as having red hair and a red beard.

Thor fully embodied the hero archetype since he was courageous, powerful, and honorable. Where Odin and Loki skulked and schemed, Thor faced his problems with a hammer in his hand and violence in his heart. Whenever a fearsome beast or wily jötunn threatened their peace, the gods generally turned to Thor for intervention.

Thor was an exceptionally popular figure and one of the initially attested deities in the Norse pantheon. References to Thor were found going as far back as the first century CE when Roman writings referred to him as Jupiter. Relics depicting Thor and his hammer were among the most common archaeological artifacts found in Northern Europe. His cult thrived during the Viking Period of northern European history (ca. 800 to 1100 CE), and his lore survived in the folk traditions of modern Germanic language speakers.

The name “Thor” in the Old Norse was pronounced Þórr, whereas in the Old Saxon thunar and meant “thunder,” which was linked to the god’s supposed control of the phenomenon.

When the Germanic people adopted the Roman calendar in the early centuries of the Common Era, they replaced the day called dies Iovis (“the day of Jupiter”) with Þonares dagaz, or Thor’s day. In modern English, this name remained known as “Thursday.”

There were several epithets used to describe Thor, among them was Atli (“the awful”), Björn (“the bear”), Einriði (“the one who rides alone,” a reference to Thor’s tendency to act on his own), Harðhugaðr (“braveheart” or “fierce soul”) and Vingthor (“the thunder hurler”).

Thor was mainly recognized for being brave, strong, and fierce. In reality, he loved fighting and rarely passed on a chance to engage in it.

Thor was often portrayed wearing a magical belt called Megingjörd or a “power belt” that was believed to double his already substantial strength. Thor’s main weapon was Mjölnir, also known as “grinder” or “crusher.” This was a dreadful war hammer crafted by dwarves in their profound caverns. He had several powers like spitting thunderbolts and laying waste to obstacles and enemies. The Mjölnir could also bring back the dead, but it seems that only in certain cases. Thor wore iron gloves named Járngreipr or “iron grippers” to handle his mighty hammer.

Thor had two servants, the twins Thjálfi and Röskva. He rode in a chariot pulled by the goats Tanngrisnir and Tanngnjóstr. Remarkably, Thor regularly slaughtered the goats and ate them, only to resurrect them with Mjölnir so that they could continue to pull his chariot—and fill his stomach!

The realm of Thor was the field Þrúðvangr in Asgard, where he built his oaken hall, Bilskirnir. The building was thought to be the largest ever erected and featured a total of five hundred and forty rooms.

Thor was born as the chief of the Aesir deities and highest of all gods Odin. His mother was believed to be a Jord (“earth“), Hlödyn, or Fjörgyn. However, in most of the cases, she was identified as a giant, making Thor half-jötunn. Thor’s heritage provided an interesting contrast with his noted enmity for the jötnar. From his father’s side, Thor had many prominent half-brothers, including Baldur, Váli, and Vidarr. Other half-brothers included Tyr, Heimdall, Bragi, and Hodr.

Thor married golden-haired Sif, who was recognized as a Norse goddess related to faith, family, and fertility. The daughter that he had with Sif was named Thudr, who may have become a valkyrie. But outside of his marriage Thor also had a lover, Járnsaxa. With his jötunn lover, Thor had a son named Magni whose name meant “strength.” He had another son named Módi or “courage”), though the boy’s mother was not identified in any surviving Norse texts. 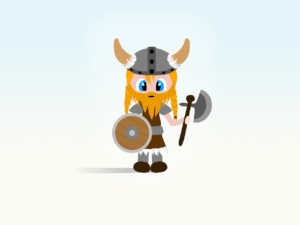 Mjölnir, the Hammer of Thor

As previously said, Thor’s hammer was forged by the dwarfs Brokkr and Eitri, and it’s one of the most frightening weapons because it can send out lightning bolts and can tear down mountains and can hit any target. The hammer returned in Thor’s hand all by itself after the target is hit. The hammer could also be used to murder and destroy, but also revive people or animals. Thor’s hammer can also be magically shrunken to fit inside Thor’s shirt. The hammer Mjölnir was sometimes used in sacred ceremonies, ceremonies about birth, but also death. There was once a time when the Mjölnir was stolen by the Giant Trym, and the cost for getting it back was the hand of the fertility Goddess Freya.