In history, different times and different countries mean different places of worship, whether we talk about temples or places in nature.  There is a whole variety of these places like temples, holy sites of any kind, or anything that reminds us of something divine. Humans have a special relationship with the environment. That means that different places are not only praised for their simple nature.  In the same way, as Jerusalem is a holy place for the three Abrahamic religions, the Celts had their sacred places. The only difference is that, for the Celts, these places were not cities or temples but holy groves in the forest surrounding those cities and temples.

Although there isn’t much information connected with these sacred groves, we are familiar with the found indications of their existence from Galicia in western Spain to Galatia in central Turkey. This means that all the Celts had these places where they celebrated their rituals and prayed to their gods. There are times when some particular trees would be considered as sacred. 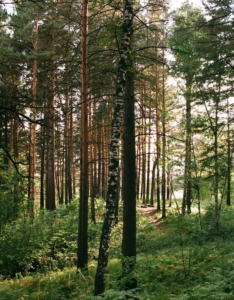 Based on Celtic mythology, Celts used sacred groves that were referred to as “nemetions.” The deity that was involved was usually Nemetona know as the goddess of the groves. The holy grove or “nemeton” was a Celtic design that mainly represents a place of open-air worship and the center of the ancient religion, Druidism. The name of the goddess Nemetona stands for ‘shrine’ or ‘sacred area.’ She is a Romano Celtic goddess who was primarily worshiped in France, Germany, and England.

The Celts did not build temples but instead practiced their spirituality in grooves of trees. Nemetona was said to be guarding over these trees with a unique protective presence, and as a result, the area was marked as a sacred site. This is a kind of a place where the soul is hushed and calm by becoming one with nature and the goddess.

During Roman times, when a shrine was erected in Bath, England depicting Nemetona as a seated queen holding a scepter and being surrounded by three hooded figures (representing the triple goddess) and a ram ( representing a male fertility symbol). She was paired with the Leocitios Mars, a storm god of war whose names stand for ‘light’ or ‘shining one’ by the Romans. This type of pairing of Roman gods with local deities was not uncommon during that time.

Although at first sight, this pairing seems awkward and degrading Nemetona’s power, research, however, has shown that she might have been first associated with the local god Rigonemetis, known as the ‘king of the sacred grove,’ who is also associated with Mars. This comes from the fact that the Celtic god of Mars was associated with protection, healing, and agriculture; it was likely that the Celts saw Rigonemetis as very similar to the similar qualities, particularly as protector of the sacred grove, sacred mother and the wellspring of life.

The lightning aspect of Leocitios may also be associated with the druid’s belief in lightning as sacred to trees, especially oaks. Such groves have been found in Germany, Switzerland, the Czech Republic, and Hungary in Central Europe, in many sites of Ancient Gaul in France, as well as England and Northern Ireland. One of the most famous nemeton sites is the one in the Nevet forest near Locronan in Brittany, France.

Through all the years of sailing, there have