I saw an article on Irish werewolves a few days ago while browsing the internet. I knew Irish mythology and folklore had many shapeshifters, but I had never read or heard of werewolves. It came out that they have werewolves and its form of Úlfhéðnar, the berserker-like wolf-warriors of Scandinavian legend.

There are no real wolves in Ireland anymore, but they were once a genuine menace, which would explain many stories about them. 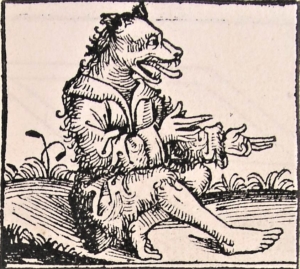 Both these are Irish terms for “werewolf.” As you will see, this werewolf is a complex creature, just as often helpful or benign as dangerous. Irish werewolves were known as guardian spirits who protected children, wounded men, and the lost, although they mostly didn’t give sources.

Geraldis (Gerald) Cambrensis (Gerald of Wales) is the author of the Topography of Ireland in the 12th century. He was in the stuff of Henry II and lived long enough to serve under Richard I. His approach is that the Irish are hardly civilized.

He describes the most fantastic stories as fact; Ireland was exotic enough for marvels to be an everyday occurrence. The tale of the Ossory Werewolves begins with a priest traveling from Ulster to Meath. He and his companion were resting by a fire in a meadow when a big wolf came up and started a conversation with them. He said:

A woman and a man (natives of Ossory) who Natalis, saint cursed, are forced to leave the human form every seven years and depart from their home. They are quitting the human form entirely and assume that of wolves. After those seven years, if they survive, two other humans are substituted in their place, and they return to their homes and their previous shape.

He then tells them that his female companion is sick and dying and asks the priest for Last Rites. The priest goes with the wolf to their lair, where he sees the female wolf, who is clearly about to die. However, he has doubts about conducting the sacrament to this animal, so the male wolf reaches out and removes her wolfskin to reveal an older female underneath.

The priest then gives her the sacrament, and she dies. The wolf then talks with the priest and his companion all night. The priest supposedly passed the story on to the bishop, who sent it to Pope Urban III.

A different variant of this interesting story comes from the Norse Konungs skuggsjá. This story has the pagan Irish mocking St. Patrick’s preaching by howling like wolves. The enraged saint curses them. Another story says he changed King Vereticus into a wolf, so this was a force of habit with him.

Laignech Fáelad was the man that used to transform into wolf shapes. After him, he and his children used to go into the shapes of the wolves and kill the herds. His name was Laignech Fáelad, for he was the first of them to go into a wolf shape.

These warriors’ stories sound a bit like the Norse version:

These were brave warriors who, howling like wolves, fought for the ancient kings of Ireland and were as mean as the animals they assumed the shape of. They lived in the far-out lands, and unlike the Ossory werewolves, they could turn into wolves anytime they wanted!

According to several tales, these warriors were mercenaries. They would fight for any king who could pay their price. The warriors did not measure this price in gold but in newborn babies.

We can see a small echo of the Norse legend here, combined with the Biblical Baal who got sacrifices of the Canannites’ first-born children.

The wolf is just one of the many shapes of the war goddess Morrígan. She described her as the “shapeshifting goddess.” Her’s first threat was aimed at the warrior Cúchulainn: “I will run the cattle on you, in the shape of a gray wolf.”

Later, she fulfilled her prophecy when Cúchulainn was trying to protect the cattle of Ulster. She attacked him three times: first as a hornless red cow with white ears, the second time as an enormous black eel, and finally as a huge supernatural gray-red wolf.

A fiann was a group of young men and women, often aristocrats, who had not yet inherited property. Faoladh has an article about them and werewolves and their relation to witches, who fought off sorcerers who stole the animals and grain of the local farmers. The most exciting part is the testimony of a man called Thiess from Livonia:

He says that they (werewolves) are the dogs of God. They go into Hell, which is across the sea, three times a year to recover cattle, grain, and so forth stolen and taken there by witches. The food is guarded by guards who brutally beat those they catch with broomsticks wrapped in horsehair. If they cannot recover the goods, there will be an unproductive, bad harvest.

He tells the story that werewolves go off into the woods, take off their clothes, and put on a wolf skin. With this, they are transformed into wolves, and they walk around in groups of up to 30 strong. They are tearing to pieces any animal they come across and eating it. Sometimes, they steal animals from local farms for the same purpose.

There is a parallel between the myth of the Battle of Magh Tuiread and these man-wolves. The Fomorian king tried to punish and starve the people of Ireland by levying such complex taxes that they had no food. The other gods, led by Lugh, rise against him and defeat his clan. After that, Ireland flourished. This certainly gives a new spin to an old legend.

To finish, two different types of legend show a wolf or werewolf acting out of character. The first features a man named Connor who was searching for some missing cattle and became lost. He found a house, but it was full of werewolves.

Connor was angry at the beginning and then afraid. However, he had removed a thorn stuck in a little wolf, and now the grown beast remembered him with respect and gratitude. He ate food with them and slept, but everything was gone when he woke in the morning. A wolf came back with new cows for him, and he realized it was the one he had helped before.

The other story involves two saints and another legendary figure who was all-breed by wolves, similar to Romulus and Remus. The mythical figure Barre, an ancestor of Amairgen and the saints, were Ailbe and Ciwa.

So we can see that werewolves were unclear and mystic figures. It is worth noting that more than 10 Irish saints had the name Faolan or Faelan (from fael, wolf).

In conclusion, we can say that this is an interesting story. A story with a lot of symbolism that can be used in creating an interesting, meaningful tattoo design.