Tattoo art traces its origins back to many different cultures worldwide, with the Japanese culture being one of these. Geisha tattoo is the most fantastic tattoo in this culture. This tattoo depicts the geisha. She was a beautiful woman that was the ultimate entertainer and performing artist in the culture of Japan.

Numerous people have negative outlooks towards geishas, relating them with prostitution or calling them the women of the night. However, the geisha was more of an artist that is trained to entertain people with dance, music, and poetry. 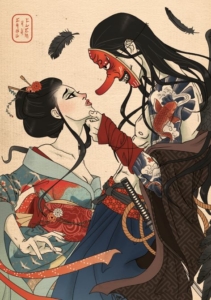 Geisha are Japanese women that entertain through performing the ancient traditions of dance, art, and singing. They are characteristics of their wearing of Oshiro makeup and kimono.

Contrary to some popular beliefs, geishas are not the Eastern equivalent of a prostitute. It is a misconception originating in the West because of the interactions with Japanese oiran courtesans that had traditional attire similar to that of geisha.

A literal translation of this word would-be artist, artisan, performing artist. Geishas are traditional Japanese female hostesses and entertainers that have refined talents in classical music, dance, singing, and even conversation. Sometimes, they are talented in poetry, art, games, calligraphy, and so on. These things are mainly used to entertain men. The geishas rose as the traditional culture of Japan declined. The tradition existed since the eighteenth century, and it continues today.

As we already mentioned, some people confuse them with prostitutes; however, sex was never the focus of their job. They would sing, play music, dance, and display their knowledge about politics and history in Japan. The ability to create a relaxed environment, as well as provide constant entertainment is their specialty. These skills play an important role at tea ceremonies, as well as other cultural events.

The first geishas were men, and the first woman that became geisha was one prostitute from 1751. Because they became popular later in the 1700s, many of them stopped entertaining with sexual favors. Then, they focused on other talents. They occupy a really important place in Japanese culture as their main job was to entertain men.

Symbolically speaking, geishas have their specific place in the culture of Japan. They usually represent fertility, because the color red is the color of fertility, and they usually wore red ferments and innerwear.

In addition to this, they depict power, as they entertain powerful people, and exercise control over them. Leadership and perfection are among the most qualities that they developed. They are the symbol of beauty, grace, mystery, and femininity, which makes them even more fascinating. They represent the traditional values of the culture in Japan. Their popularity increased for a really short time period and reached some Western countries as well.

Geisha tattoos are almost a popular tattoo design among Japanese cultures. In the culture of Japan, both men and women wear this tattoo design. As we already mentioned, geisha is the symbol of mystery and beauty.

Even though they hold profound symbolic meaning and significance among the culture of Japan, geisha tattoos are slowly growing demand among the other parts around the world because of their beauty.

Although not a mainstream design, geisha tattoo is popular, and they are present in various sizes and styles. Moreover, they have different meanings and symbolism. When it comes to creative and colorful body art in the form of a human, a small number of tattoos can compare to this one.

The geisha tattoo can also represent feminine power and intrigue. For most people, she remains elusive, unattainable, and untouchable. In paintings, art, as well as tattoos, she finds its association with cherry blossoms too. Such association represents the transience, beauty, as well as fragility of life.

As we already said, geisha tattoos can have many different meanings and symbolism. The most common one is:

Some tattoo artists can create interesting variations of these tattoo designs. For example, they can depict them with ghosts or zombies. While creating a typical geisha art, the expertise and experience of the tattoo artist play a huge role. This is because the geisha tattoo is a really hard design to do. The tattoo artist has to combine softness, elegance, sensuality, as well as attraction.

Another unique feature of these tattoos is the vivid colors and patterns. Just like we said, red is the most preferred dress color. However, some other vibrant colors can find their uses, depending on the choice of the wearer. In the end, your tattoo will symbolize what you want it to, regardless of what it is. However, before getting this tattoo, research more about its meaning and symbolism.