The cherry fruit was a symbol that was used to represent the Samurai warrior caste of shogun-era Japan. The blossom of the tree is the one that is quintessentially Japanese and figures prominently in the tattoo art of Japan.

The brief and beautiful time of flowering, as well as the swift fading and subsequent scattering petals in the wind, are the symbol of the fragility of human existence and also the perfect death, which is marked by the indifference to the world that is left behind. 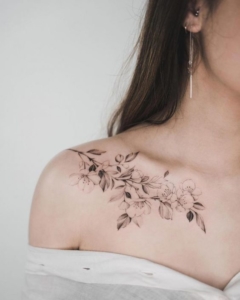 When combined with its association with purity, it became the ultimate emblem of bushido, which is the code of the warrior. The ideal Samurai, which is a combination warrior and sometime poet or artist, was ever ready to meet his death, ever appreciative of the fleeting moment.

As we already said, cherry blossoms are the national symbol and treasure of Japan. Every spring, at the time of the first weeks of the season, Japanese people practice Hanami, which is the viewing of flowers, in the parks and streets of their cities, sometimes even crossing the entire country with the sole purpose of watching the flowers fill the landscape. The cherry blossom embodies a time of joy, and it was also considered a feminine symbol.

Japanese also refer to cherry blossom as a symbol of life, beauty, and the fragility of life. It is a reminder that life is almost incredibly beautiful, but that it can also be tragically short. At the time when the cherry blossom tree blooms for a time each year in a brilliant force, it serves as a visual reminder of how precious, as well as how precarious life is.

Whether you choose a Japanese cherry blossom tattoo to celebrate life after illness or to honor a lost love, the intricate design makes a beautiful choice for a full canvas tattoo and is usually selected as a back piece or worked into smaller shoulder or leg tattoo designs.

Why not bloom and become the beautiful being that you are with a cherry blossom tattoo?