Usually, we identify soldiers from their body structure, uniform, and other general traits. However, one of the other ways we can identify a soldier is through the tattoos on their bodies. Even though not every soldier has tattoos, many soldiers have one or several of them on their bodies. These are the tattoos that we all know as military tattoos. Just like any other tattoo, the meaning of these tattoo designs depends on the person that wears them. It also depends on why the person has it or on its placement on the body of the person. However, the most common meaning of these symbols is an accomplishment. 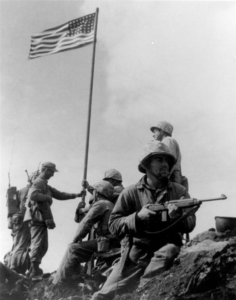 Surviving the hard training and being qualified to serve in the military, soldiers get tattoos to show their accomplishments. In other words, these tattoos can be a sign that the person is a soldier or was in the past.

Another common meaning of military tattoos in remembrance of the friends who died in battle. When serving in the military, developing a close relationship with the members of your unit is something pretty normal. As the nature of any war is, not everyone always makes it home. To honor those that never make it home, soldiers get military tattoos as they will remind them of their friends.

Raising the Flag on Iwo Jima is an iconic photograph that Joe Rosenthal took on the 23rd of February, 1945. The photograph depicts six United States Marines raising a U.S. flag atop Mount Suribachi, at the time of the Battle of Iwo Jima, during the Second World War.

Sunday newspapers published the photograph for the first time on the 25th of February, 1945. It has been extremely popular, and people reprinted it in thousands of publications. After that, it became the only photograph to win the Pulitzer Prize for Photography during the same year as its publication. The people from the U.S. regarded it as one of the most important and recognizable images of the war.

The three marines in the photograph are Sergeant Michael Strank, Private First Class Franklin Sousley, and Corporal Harlon Block. The three of them died during action over the following several days. However, the other three surviving flag-raisers are Corporals Rene Gagnon, Harold Schultz, and Ira Hayes.

Two men, who were misidentified as flag raisers, helped raise a smaller flag, about 90 minutes earlier. Both of them were still on the mountaintop and witnessed the specific moment of raising the larger flag. All the Marines were under the command of Brigadier General Henry B. Liversedge.

Later, Felix de Weldon, during 1954, used the image to sculpt the Marine Corps War Memorial. He dedicated it to all marines that died for the country. The sculpture’s location is in Arlington Ridge Park, near the Ord-Weitzel Gate to Arlington National Cemetery and Netherlands Carillon.

Even military men use many types of tattoos to memorize their wartime actions, some images transcended individual experience to capture the imagination of a generation.

The raising of the American flag on Mt. Suribachi shows the flag on a pole that is not yet upright. It also shows the six helmeted men how took their positions, surrounding the pole. They were either planting the flag in the ground, hoisting it above their shoulders, or helping to lift it with their hands stretched.

This image became emblematic not only of the battle for the Pacific that happened on numerous small islands. It does not only symbolize the battle that happened on Iwo Jima, or the Second World War. In fact, it also symbolizes heroism in the face of harrowing conditions, the sacrifice of Americans, and victory.

There are many statues, paintings, U.S. postage stamps, and even tattoos based on this photograph. This photograph is definitely the most iconic one from World War II. That’s why it will have great meaning as a tattoo design, especially for Americans.

The Iwo Jima flag-raising also become a popular symbol for organizations and movements wishing to convey teamwork, patriotism, and victory. The use of this image ranges from respectful homage to what some consider offensive misappropriation.

There is no other picture that so succinctly, as well as evocatively captures the triumph of the Allied forces. Moreover, it even highlights the critical role that the U.S. troops played in the Pacific. The picture even became the enduring symbol of steadfastness, as well as the strength of the Marine Corps.

The photograph of Rosenthal became a profoundly ingrained cultural image for America. Americans designed the U.S. Marine Corps War Memorial in Arlington, Virginia after this photo. President Roosevelt also used this image in order to promote war bonds at the end of the war.

Overall, the use of this image in tattoos evokes the feeling of American victory and accomplishment.