You probably know that Irezumi is Japanese tattoos, and probably one of the most popular styles in tattoo art that still goes strong and bold today. The profound meaning of these tattoos adds a depth to the art that helped them persist for centuries. Their meaning also increased their appeal to so many outside of the culture of Japan. If you are thinking about getting a Japanese tattoo, you should first search more about its meaning and symbolism. Do this in order to prevent misunderstandings and to hurt someone’s feelings. 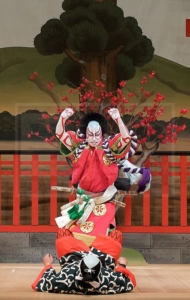 Kabuki is a classical Japanese dance-drama. Kabuki theatre is famous for the stylization of its drama, and for the elaborate makeup that the performers wear.

During 2005, UNESCO proclaimed the Kabuki theatre as an intangible heritage possessing outstanding universal value. In 2008, the Representative List of the Intangible Heritage of Humanity of UNESCO inscribed it.

The individual kanji, from left to right, means sing, dance, and skill. Therefore, the translation of Kabuki is “the art of singing and dancing.” These are, however, ateji characters that don’t reflect actual etymology. The kanji of “skill” means a performer in kabuki theatre.

As the word kabuki derives from the verb kabuku, which means “to lean,” or “to be out of the ordinary,” we can interpret Kabuki as “bizarre” or “avant-garde” theatre. The expression kabukimono originally refers to those that dressed bizarrely. Usually, the English translation is “strange things” or “the crazy ones,” and refers to the style of dress that the gangs of samurai were wearing.

The history of Kabuki started in 1603. At that time, Izumo, on Okuni, started performing with a troupe of female dancers a new style of dance drama. This performance was on a makeshift stage in the dry bed of the Kamo River in Kyoto. It originates from the 17th century.

As there was a fast formation of rival troupes, Kabuki was born as ensemble dance and drama where women performed. This was a form very different from its modern incarnation. Later, the performers were also available for prostitution. That’s why people called them prostitute-singing and dancing performers during this period.

Although it is not typically utilized in traditional Japanese tattooing, the kabuki face finds its uses in Western tattoos. This is in order to evoke an Oriental feel. Kabuki is the traditional form of theater in Japan. In Kabuki, the actors bled music, song, dance, and mime with elaborate costuming and makeup to serve up extravagant performances.

The kabuki face finds its use based on the exaggerated makeup which the actors use. First, they paint their face entirely white, and then they give themselves the distinguishing marks of villains and heroes. Here, they pay particular attention to the eyes.

The kabuki face in tattoo art is a connection to traditional forms of popular Japanese entertainment. It also represents the Japanese culture, and it is an opportunity to incorporate a stark piece of artwork into designs.

Because the traditional design of kabuki face is to change expressions, it can represent various stages of emotion in tattoos. Some of those emotions are:

Regardless of where you would like to place your tattoo, it will definitely look wonderful. Japanese tattoos always have an interesting history because most of them represent the culture of Japan.

A kabuki mask tattoo is an art form of Japanese entertainment. This makes it the perfect tattoo for every person that has some interest in those areas. However, remember to research more about it before you decide to place it on your skin.