Tattooing is popular in Japanese culture. Therefore the samurai tattoo design is definitely among the most desired ones since samurais are the most prominent figures in Japanese history. The Samurai represents a significant symbol in Japan. In ancient Japan, the Samurai is a class of fearless, strong, highly disciplined, and well-trained warriors to the extreme, ready to give their life for the Japanese culture at any time. In the world, they are famous as one of the best legions of soldiers ever seen. 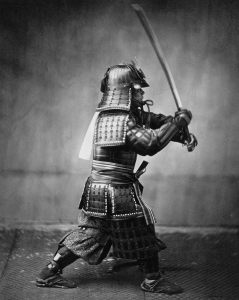 These soldiers, besides swordsmanship and fighting skills, were also made extremely sensitive human beings by giving them a thorough education in arts and poetry. Samurai represented a combination of the best of the warrior and the artist. The origin of the word ‘samurai’ is from the Japanese phrase saburau, which means “those who serve in close attendance to the nobility.” In Japanese, they are known as bushi, and their lives were governed by the ‘Bushidō’―the code that consisted of the moral principles and actions that every Samurai had to oblige.

These special tattoos are incredibly popular not only in Japan but also in Asia and other parts of the world, where people appreciate the Samurai designs for their grace and honor. Samurai art is one type of body art that is getting more and more popular throughout the world. A lot of men and women tattoo lovers are engraving this intensely stunning body art on their bodies. The reason behind this is probably due to the strong symbolism that these tattoos carry behind them. Usually, they represent the traits and attributes of the Samurai. However, often these tattoos symbolize strength and courage, along with a host of other meanings. The designs are quite stunning and perfect for sleeve tattoos or other body parts, with various elements and symbols that can accompany their theme.

Samurai tattoos represent various different meanings. The meaning depends on the design that you choose; however, in the end, your tattoo symbolizes what you want it to. Some of the traditional meanings are:

The Samurai practiced living every day like it was their last, and that means that your tattoo can symbolize the same thing. For instance, it can be there to remind you of how fragile life really is. It can serve as a reminder for you to live every moment like it was your last because none of us is sure of tomorrow. Moreover, it may simply be chosen by those who value the Samurai and their culture. These tattoos have been around for many years in Japan, traditionally worn as full-back, full-body, or full sleeve tattoos.

This kind of samurai warrior tattoo, done in black and grey details, is more likely to be carried out by the soldiers on the front line. The horse in this design symbolizes speed and power, whereas the Samurai with a sword indicates the beginning of a war. Furthermore, this samurai tattoo design also shows the strength of the warrior to achieve victory and defeat evil. The dark color used in the tattoo gives a marvelous effect with the grey shadings. This samurai tattoo is usually done as a full-back tattoo to give a proper vision.

This samurai tattoo design includes an eagle and a samurai with a skull head as well as skulls around it. The eagle stands as a symbol of victory, and the skull represents death. Altogether, this tattoo represents victory after death and gives a small glance of the world after death. This design also shows the triumph of good over evil. The slight navy blue shade included gives more effect to the picture showing hell. It also serves to pay respect to the warriors who lost their lives for the natives.

In the same way, as the Samurai represents pride and honor, the sun and the Fuji Mountain are the two pious elements of Japanese culture. Therefore, this Japanese Samurai tattoo is considered to be a sacred piece of art. The sun peeping out from the Fuji Mountain stands for a unique attraction to this tattoo. The color combination used in the tattoo is a perfect choice for colored tattoo lovers. Not only has this tattoo won the hearts of the Japanese, but it is also viewed worldwide.

The samurai helmet is a design that can be used by itself in Japanese-style tattoo artwork.

Although part of the total body armor that warriors used in battle, the helmets are distinct and can be highly ornamented. The helmet is made of metal and usually incorporates a back-flap that extends down over the neck, and the front of the helmet often includes a mask in the form of fierce demons, used to inspire fear.

This tattoo masterpiece also attracts the non-Japanese people towards it. This samurai tattoo design symbolizes defending and indicates the atmosphere at that time. This tattoo is perfect and gets a clear vision on the sleeves or back. The various color combinations can make this tattoo very attractive. A samurai with a skull face represents the strength and power of a samurai to fight against evil. So, this samurai tattoo represents the actual reason why they are counted as pious.

A Japanese dragon with a samurai warrior is a unique tattoo design and an excellent choice. It represents and aggravates the strength of the message that the tattoo portrays. This is one of the best blends of both dragon and samurai tattoos idea that indicates courage and strength, and the samurai warrior stated the same. Therefore, this masterpiece is a beautiful combination of fierce war and victory achieved it.