The tiny acorn is an antique representation of life and birth. For a long time, it has been valued for its potential strength and virility and was a widespread symbol of regeneration. In a literal sense, it is a seed that eventually grows into the mighty oak tree. So, from the little acorn springs, the mighty oak, prompting various cultures to see in it the qualities of fecundity and patience, as well as urging those who start small projects to persevere.

In Scandinavia, the tiny nut has been sacred to Thor, who is the Norse god of thunder, and was used as a symbol of fertility and immortality, as well as withstood lightning strikes. The acorn subsequently became associated with protection from storms. Keeping an acorn on the window was still recommended only because of this purpose.  In an allegorical sense, it is an unborn power and fruitfulness waiting to be released. 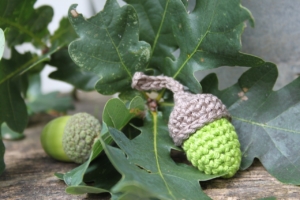 In ancient cultures, the tiny nut was taken as a talisman to ward off evil spirits. For example, in Britain, carrying around an acorn meant long life, as well as good luck and guidance when lost. The Old English folklore says that a woman that carried an acorn on her person kept wrinkles away.

For the Native Americans, this tiny nut was a traditional ration in times when there were food shortages. Also, in Japan, Korea, and Europe, the acorn was soaked to release tannins before being dried, and later it has been grounded for a meal. According to one legend, English drunkards of the 1600s were given the juice from the acorn as a hangover cure, as well as for strengthening in the resisting drink after that.

In tattoo designs, acorns are sometimes drawn along with squirrels. A circular beauty of oak leaves, as well as acorns, its an ‘emblem of abundance,’ and it is a very popular tattoo motif with a deep tattoo meaning and symbolism. A pair of acorns may suggest that the owner of the tattoo is “well hung” and that he/she is willing to either advertise the fact or maybe is a bit insecure about it.