Have you ever thought about getting a beautiful dream catcher tattoo, so that you can keep the good dreams, and let go of the bad ones? Continue reading our article to discover the origin of the dream catcher, its use in tattoo art, and it’s meaning and symbolism.

A lot of people are familiar with the dream catcher, which is a hoop that contains a woven mesh and feathers and beads hanging from it.

However, there are many people who don’t know where its true origins come from. Although the dream catcher is generally simply connected with American Indian culture, it was not until the 1960s and 1970s that it has been adopted as an American Indian symbol. 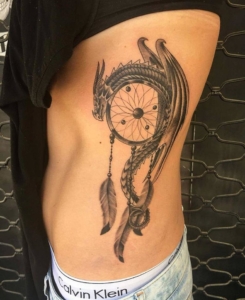 So, the dream catcher is a symbol which probably originated in the northern Midwest, in the Ojibwe, Canada, where the people have an ancient legend about the Spider Woman that captured the sunrise for people in the dew of the web that she had, and the dream catcher was in the shape of a circle to represent how the sun travels across the sky every day. The Spider-Woman took care of the children on the land, and the dream catchers were constructed and hung over the beds of those children to work like a charm and simply allow good dreams to enter in their minds.

This means that the dream catcher filtered out the bad dreams, allowing only good thoughts to enter through one small hole which was placed in the center. With the first rays of sunrise, the bad dreams would perish. The points where the web was connected with the hoop often numbered eight for the eight legs of the Spider Woman.

However, when the tribe expanded, and the people migrated, the Spider-Woman had difficulty to reach all of the newborns in time. Because of that, women of the tribe took over and started creating their dream catchers to protect their babies.

The dream catchers were made of natural materials, and they did not last long, being regularly replaced by new ones to accompany the babies through their next life cycles. Moreover, it was traditional to put a feather in the center of the dream catcher, which symbolized the breath of air, but also meant to be entertaining for babies to watch.

The use of gemstones was not recorded in the ancient tradition, but later they were used instead of feathers, which were typically taken from some protected birds.

Dream catcher tattoos are especially popular amongst females, generally because the feathers and web-like patterns were seen to be more feminine design. The actual web is usually adapted to the taste of the person.

These types of tattoos are very common among Native Americans, and they represent the symbol of their rich cultural heritage, and simultaneously, they keep evil and negative energies away. They also protect the person who wears them against bad dreams and nightmares, while helping nice and joyful dreams to enter their mind.

Let’s take a closer look at the symbolism and meaning of the dream catcher tattoos:

Dream catchers can represent safety and protection. There are people who choose this tattoo design as they feel that their tattoo is going to protect them from anything that is bad, as they were always associated with protection from negative spirits and bad dreams or bad omens too.

This is another of the meaning of the dream catcher. Women usually choose this design, and they add the feathers of their own, to highlight their wisdom, rationality, and erudition.

The males choose this tattoo design too, but they combine it with the feathers of an eagle to embody power, bravery, and courage.

As you can see, protection is not the single meaning of the dream catcher tattoo. Still, there are a lot of other important meanings and symbolism behind it, which you can find interesting and as a motif to choose your new tattoo – the tattoo of a dream catcher.

Tattoos of dream catchers and variants on them are a very popular part of the design with a Native American theme. There are many different ways to play with this design, but most of them have a web-centered inside a hoop.

The dream catcher design can be inked alone or in pairs with some other elements that are going to bring new meanings with them. Feathers, arrowheads, crystals, beads, stones, and jewelry can also be incorporated, woven into the web, or also added on the fringe, which dangles down from it.

Some important spirit animals can also be included, and they can be horses, bears, bison, and huskies. You may have your design woven into the web, such as a face, a landscape, a heart, or a bear paw print in the center of the loop. You can also have it rendered in black ink or utilize any combination of colors.

Instead of choosing the traditional circle, the webbed hoop itself may be in any shape, such as heart, yin yang, or everything you choose. You could also have the artist depict the negative spirits you are fighting against there so that your tattoo is going to reflect your desire for protection.