One of the most common runic symbols seen in runic or northern occult circles is the Aegishjalmar, or also known as Helm of Awe. The Helm of Ave is one of the most used Norse rune tattoos with deep meaning, symbolism, and several different design variations. Some people go so far as to get it tattooed on their arm, without really understanding its real meaning.

An aegishjalmar can take on a lot of different forms, but generally, each of them is composed of the same small building blocks of ancient Norse runes. They start with a simple cross in the middle and continue growing from there. They are mainly used as talismans or protective tools. However, it is impossible to tell the meaning of any particular one, since the small runes that it consists, serve some general functions, like collecting energy or routing it from one place to another. 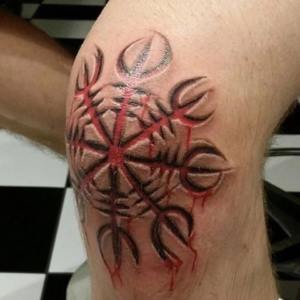 Only the person that is the creator of each new aegishjalmar, giving it a certain purpose upon creation, can ever truly say what its meaning is.

As we already mentioned, the name of the symbol is aegishajalmar, which means “helm of awe.” An alternative translation of it is “helm of terror” in the sense of striking terror into one’s attackers. Often, it is mentioned in the sages in the context of a “shield of terror” or the “mask of dread.” Traditionally, it has been painted on the foreheads of warriors to either confuse or strike some kind of fear into the hearts of foes, and some people say that it was even curved.

Also, it must be emphasized that the aegishajalmar is primarily for the defense of war. So, if you are getting this symbol tattooed on your skin, do not panic – although it is the “helm of terror,” it is mainly a protective symbol against enemies, and it is not known that it has any directly harmful effects of symbolism towards non-belligerents.

It is not strictly a warrior symbol, but it is a sign that you are not afraid to fight for what is yours.