The typographical symbol ampersand (&) was created with the condensing or shortening of the Latin word “et” meaning “and.” This symbol is a visual representation of thee and t being joined together. When writing manuscripts, this symbol saves both spaces and time for the scribe to write an ampersand rather than the scripted “et.” In more recent times, the ampersand has become an element of design that creates more visual interest.

The ampersand symbol is one that we are all familiar with but is not as common as a tattoo design. The ampersand symbol is mostly used when two of the same letters are being joined together. In most of the cases, this symbol is used in the names of businesses—for instance, the chocolate candy, M&Ms. Even the tech company AT&T uses this symbol. There are many examples of when this sign comes into play, but more than anything, this sign is used as a way of using the word ‘and’ without, in reality, having to type it out. By doing this, you have a lot more free space for company names, and it helps shorten sentences as well.

The use of this symbol has been traced back as far as the 1st century A.D. since it has been used in Old Roman cursive writing. In Old Roman cursive writing, two letters would frequently be joined together and make a letter of itself. The letters E and T were often joined together in this form of writing to say ‘and.’ As time passed, this symbol has evolved, ultimately giving us the symbol we recognize nowadays. Even though the other three variations are still used, the final design is the one that is most well recognized throughout diverse cultures.

The ampersand has not only been of enormous help for the world of literature, but it has also found its way into the tattoo world. The ampersand symbol is not just a way of linking words and letters, but also has its meaning and can tell a whole story by itself. Like every other tattoo, each one can hold different meanings to the person holding onto it.

This is not only one of the most famous symbols and characters in the world of writing, but people who own this image as a tattoo on their skin have even made up a whole story to go along with it. The ampersand symbol itself suggests that there is more to the story. It allows people to see that there is more to be said on whatever subject you may find it in. As a tattoo design, it can indicate life itself. Through this tattoo, you are telling the world that you have a story that is not over just yet.

The symbol can also symbolize your view for the future. It can be a sign of ending a specific phase of your life. No matter whether you just went through some difficult times or you has emerged victorious on a life-long struggle you have at last conquer, the ampersand symbol can say only that. As a tattoo, it can also serve as a representation of the various challenges and rewards of the past, present, and continuing future and to always strive for a better tomorrow. 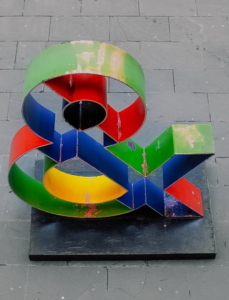 Because this symbol is known for joining together two different letters to form one word, getting matching ampersand symbol tattoos is popular amongst couples. This is a fun tattoo to get with your loved one if you both are interested in getting matching tattoos. Given that this symbol is one that represents the converging of two things and symbolizes the maintenance of a certain thing, it is perfect for a matching tattoo to express your never-ending love for each other.

This is a perfect choice for friendship tattoos as well. The bond of two people getting ampersand symbols for tattoos signifies that your friendship lasts forever through the good times and bad.

Because this is such a simple design, the ampersand symbol can almost be tattooed anywhere on your body. This simple yet influential symbol can be done in any size, from large, to tiny and is easy to manage. The most popular spot for this symbol is the wrist. The wrist is the ideal spot for a tattoo, such as this bearing in mind how easy it is to spot it. Another small but great area where the symbol can fit is behind the ear, as well as the ankles. If you would like this tattoo to be a little larger but hidden, an ampersand tattoo on the chest is a good option. The back of the neck is an additional area that is popular for this symbol if you would like this tattoo to be noticeable but, at the same time, easy to hide, and you have longer hair.

Throwing a little color into the combination is never a bad idea if you wish for a more creative ampersand tattoo. Even though it is perfect only with black ink, many tattoo enthusiasts have gotten this symbol in multiple colors. A rainbow ampersand symbol, for instance, can easily be done by any tattoo artist. Before deciding, you can ask your tattoo artist about which colors would work best with your skin tone as well as which colors are lasting longer without fading too much.