One of the best natural events to ever happen in the world is the appearance of the rainbow. Rainbows include every color that we know. Their magical appearance is a true sight to see. 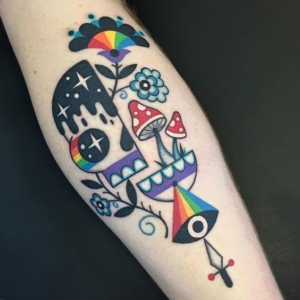 Because of its uniqueness, the rainbow is a common appearance in the tattoo world as well. Many people love these tattoos, and they are especially popular among women. However, this doesn’t mean that men don’t practice them too.

A rainbow is a meteorological phenomenon that is caused by reflection and dispersion of light in water droplets, which produces light appearing in the sky. It takes the form of a circular arc. Rainbows in which the sunlight causes always appear in the section of sky directly opposite the sun.

Rainbows can also be full circles. But, the observer normally sees just an arc that the illuminated droplets above the ground form. This arc is centered on a line from the sun to the eye of the observer.

In a primary one, the arc is showing red on the outer part and violet on the inner side. The light that reflects when entering a droplet of water and then reflects inside on the back of the droplet and reflects again when leaving it causes this effect.

In a double rainbow, a second arc exists outside the primary arc. It has the order of its colors reversed, with red on the inner side of the arc. The light that reflects twice on the inside of the droplet before leaving it causes this rainbow.

Rainbows don’t have a specific location at a specific distance from the observer. They come from an optical illusion that any water droplets seen from a certain angle cause. Thus, rainbows aren’t objects, and you can’t approach them physically. Indeed, the observer can’t see this phenomenon from water droplets at any angle other than the customary. The angle should be the customary one of 42 degrees from the direction opposite the light source.

Rainbows span a continuous spectrum of colors. The most common colors that the human eye can see are red, orange, yellow, green, blue, indigo, and violet. Different forms of airborne water can cause rainbows. These include not just rain, but also spray, mist, and airborne dew.

Below, we are going to talk about these tattoos, their meaning, and symbolism in the tattoo world. Keep reading and see if this tattoo design corresponds to you and your personality traits.

Rainbow tattoos are unique, colorful, cute, meaningful, and beautiful tattoo designs. These tattoos may include the rainbow in its natural form. Also, the rainbow colors may be added to a few different tattoo symbols.

These tattoos are an excellent choice because of the sheer number of colors in them. You can’t just have this design tattooed on your body. You can also use the spectrum of colors on them in order to make up some other designs. There are endless possibilities.

Moreover, in the symbolic sense, a rainbow is something magical. It represents the right mix of things that is reflective of life itself. Each hue in the colorful rainbow is something that holds great meaning and symbolism. You have the choice to use the rainbow itself, or use its colors in other tattoo designs.

In Christianity, the rainbow represents a covenant or promise by God, appearing after the great flood of Noah. The rainbow in other symbolism elicits similar interpretations. This gigantic sky phenomenon has been sometimes considered an expression of divine benevolence. However, more often, it was a pathway between heaven and earth. Also, it was the unification of the two that signaled harmony.

The rainbow is an extraordinary natural phenomenon. Usually, people misunderstand the rainbow’s meaning and significance in the world. Appearing after rain on a sunny day, this phenomenon is the optical refraction of light. It was provoking our imagination for centuries, and so it is loaded with a lot of symbolic meanings. It symbolizes change and transformation. It has the shape of a bridge; in that way, it represents a religious symbol. Moreover, with its colors just visible in special circumstances, it is the symbol of connection and creation.

The warm colors speak of creativity, strong emotions, and passion. The cold colors like indigo, blue and purple, speak of self-consciousness, higher cognition, and wisdom.

The beautiful meaning and symbolism of the rainbow is not its only advantage. Rainbow tattoos are joyful, bright, and pleasing to the eye. You could have a watercolor design, something with bold or maybe more decorative colors. The rainbow tattoo is always going to be trendy thanks to its universal message.