Amun, who is also known as Amon, Amen or Ammon is the Egyptian God who appears as a member of the Hermopolitan, and he represents the wind, sun, and air. He is regarded as one of the most important gods of ancient Egypt who rose to fame at Thebes at the beginning of the period of the New Kingdom. Because of that, he also became known as the king of the gods, and the supreme ruler of the New Kingdom. 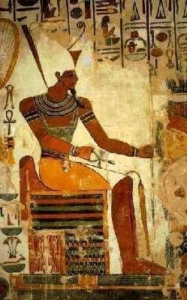 Usually, he has been portrayed as a bearded man who is wearing a headdress with a double plume or, after the New Kingdom, as a ram-headed man or merely a ram, which symbolizes fertility in his role as Amun-Min. His name means “The Hidden One,” “invisible,” “mysterious of form,” and unlike most of the Egyptian gods, he was considered Lord of All who encompassed every aspect of creation.

Occasionally, his image has been painted blue, to show his invisibility. Over the centuries, he came to symbolize knowledge, as well as impartiality, and rulership. He was considered as the actual physical father of all pharaohs. Indeed, one of the most famous of the pharaohs had his name changed to Tutankhamen, which actually means “the living image of Amen” in order to show his connection to this symbol of traditional kingship.

Once, when Amun has been identified as the most powerful deity in the universe, he acquired epithets that described his various aspects as best they could. It has been written about how the Egyptians themselves called him Amun Asha Renu or ‘Amun rich in names,’ and the God can only be fully understood regarding the many aspects which were combined in him. Another name by which he was known as “The Concealed God,” whose nature could not be identified, as well as associated with air or the wind which can be felt but not seen or touched. He was also the Creator God that initially stood on the first dry ground at the beginning of time and created the world by mating with himself.