This particular design shows the Angel of the Apocalypse or the Angel of the Judgment. The winged Angel with a rayed halo wears a pleated tunic that is belted at the waist and pointed boots. The Angel holds the scales of justice in the right hand and a sword in his left. Per Revelation 10:1-10, the Angel is standing on the earth.

This Angel, unlike the benevolent angels so prevalent in Western art, is rendering the last judgment of all souls at the end of the world.

The Coptic Church, originating mostly from Egypt and being still based, there is the principle Christian Church in that predominantly Muslim country. Additionally to that, there is also a Coptic Orthodox Church in Jerusalem, as well as a few others in the Holy Land, built in the nineteenth and twentieth centuries, as well as a Coptic bishopric in Khartoum in Sudan.

Even today, a Copt is a Christian, whether it is a Catholic, Orthodox, or some other denomination of Egyptian descent that lives in Egypt or abroad. Still, tattoos are common only throughout Egypt. 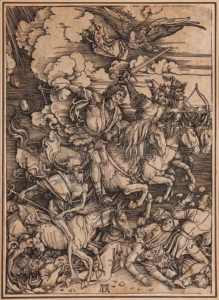 Currently, there are approximately 9 million Copts in Egypt and another 1.2 million around the world. The religious practices that they have are familiar to most Christians, with some expectations, one being fasting: virtually, all Copts fast through Lent, and strict Copts endure some kind of fasting 210 days out of each year. The Coptic Church is directed by a Pope that, unlike his counterpart in Rome, does not claim papal infallibility. Divorce is permissible in a few cases, which include adultery and bigamy. The Coptic Church also refuses to canonize official positions on certain problems, which include abortion, believing that such matters can be better resolved on a case-by-case basis by the father of confession, opposite to having a blanket canon which makes a sin of such practices.

The Coptic tattoos, which we can see nowadays, are those which are recorded by John Carswell in 1956 in Jerusalem, and they were principally done for Christian pilgrims to that city, in that way reflecting there a practice which is centuries-old.