The selection of a beautiful, interesting, and symbolic tattoo design is always a tough task to do, as the Coptic cross. The tattoo fonts and names designs are getting quite trendy among young people, and even among adults. Hence, proper selection is always necessary in order to show your feelings, love, and passion.

There are some tattoo designs that are inspirational, dedication, showing love, respect, honor, heritage, give a certain message, or show some attitude to live or one’s norms, and so on. 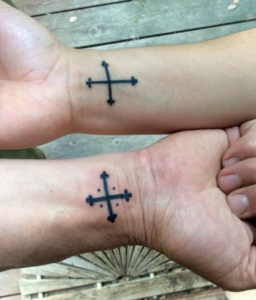 A lot of people will get confused when they select their best tattoo design. They often get influenced by others, and they try those designs on themselves. However, it is always considered better to choose a design with a certain meaning that, according to what is seen as feminine or masculine.

Tattoos – while some people despise them, others feel that it is a soulful custom of permanently inciting a theory of a certain symbol or belief. As a lot of tattoo lovers say, tattoos are holistic, spiritual, mental, emotional, and physical experiences that are permanent at any level. Because of their permanence, you have to choose them carefully and pay attention to their symbolism and meaning.

Here, we are going to present you with one tattoo design associated with Egypt. From Ankhs and the Eye of Ra to modern Coptic crosses, symbols commonly connected with Egypt have a lot of powerful meanings. As Egyptian culture has survived for such an immensely long time, it contains a lot of contradictory myths and vastly different meanings for various symbols. Such symbols evolve as old ideas become incorporated into new myths or gods. As such new myths or gods ascend in popularity, they also start taking over aspects of other deities.

Coptic Christianly has been developed in Egypt under Saint Mark, writer of the “Gospel of Mark.” The Coptic people became separated from mainstream Christianity at the Council of Chalcedon in 451 CE over theological differences.

Egypt was conquered by Muslim Arabs in the 7th century. The result is that the Coptic Christianity has developed largely independently of some other Christian communities, developing their practices and beliefs.

The church of the Coptic people is officially known as the Coptic Orthodox Church of Alexandria, and it is led by its pope. In the last several decades, the Coptic, as well as Greek Orthodox churches, have reached agreement on a variety of matters, which included recognizing the marriages and baptisms of each other as legitimate sacraments.

When it comes to the forms of the Coptic cross, each of the variations of it has been a fusion of the Orthodox Christian cross and pagan Egyptian ankh. The Orthodox cross has three cross beams, one for arms, and the second sloped for the feet, and the third at the time for the INRI label placed above the head of Jesus.

The early Coptic cross misses the foot beam, but it includes a circle around the upper beam. That’s was an ankh with an armed cross inside the loop. For these people, the circle is also a halo representing divinity, as well as resurrection. Halos or sunbursts with some similar meaning are also sometimes found on orthodox crosses.

The cross is ornate and patterned, reflecting the cultural influences of Egypt and Ethiopia, where most of the members of the Coptic Church reside and practice. The first Coptic Church has been founded in the sixth century in Egypt as a rebellion against the Orthodox Church, and even today, it claims to practice a more original Christian doctrine than either the Greek Orthodox or Roman Catholic churches.

As we already said, this cross is a symbol of Coptic Christianity, the primary denomination of Egyptian Christians nowadays. The cross comes in some different forms, and some of them are influenced by the older pagan ankh symbol of eternal life.

Nowadays, there are two basic forms of the Coptic cross, and they are the old form and the modern one.

The Coptic cross tattoo, regardless of being the old or the modern form, is usually placed on the wrist. However, this does not imply that it is the only place it has to be placed on, but it is simply the most common.

The Coptic cross tattoo is a permanent identification marker that signals to all the faith and community belonging to the bearer. A tattoo is a lifelong commitment, so you always have to choose it carefully.