Armadillo, which was adopted as the official “small mammal” of the state of Texas in 1995, is also well-known for the nine-banded shield of its back. This shield is made up of overlapping bony plates. When attacked, the armadillo can roll itself up into a ball in order to protect its vulnerable undersides. Also, it is a desert animal that has come to be associated not only with Texas but with the American Southwest in general, and it represents survival and toughness in that grueling environment. 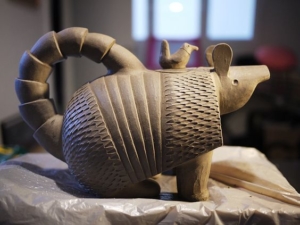 Even though it was adopted as the official ‘small mammal’ of Texas in 1995, it has a much longer cultural history. The word armadillo translates as “little-armored one” in Spanish, this being an acknowledgment of the body shield which covers its back.

A symbol of survival, as well as toughness, armadillos happen to make a sweet tattoo idea. It can be best done in a bold traditional style armadillo tattoos is a cool, as well as creative design which is not an everyday piece. So, if you are after a quirky and uncommon animal tattoo then the armadillo may be the way to go.

As a spirit animal, the armadillo symbolizes that it is time to define your own boundaries and space. You should also do that for clarity in situations in which you can find yourself, having trouble saying “no,” as you may be being taken for granted by others. While community, as well as openness, is also essential, you have to learn to guard your personal space, permitting others to enter only when you want them to.

Often, the armadillo symbol may be viewed as living a self-concerned, as well as aloof life. The symbolic emphasis on defense, protection, and guarding only encourages this view. However, you must not neglect the symbolism which it offers for our lives.

Among others, the armadillo meaning symbolizes trust, as well as peace, balance, pacifism, compassion, and complexity. It is a representation of detachment, as well as objectivity.