The bear is an animal that has a lot of traits that appeal to body ink lovers. Some of them get one bear claw design, while others have several footprints. Nowadays, the claw prints can symbolize mobility, as well as power, stability, and good luck.

Especially the animal itself holds a very deep, as well as a powerful connection with the ancients, so some people choose the bear claw tattoos to help them relate to their heritage. 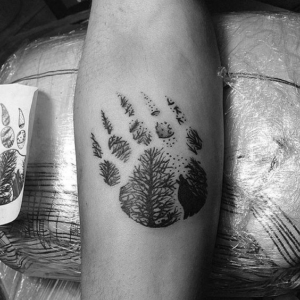 The Native Americans had a quite significant and special relationship with this animal, and they believed that this beast was somehow related to the spiritual world, so they conducted a lot of rituals in honor of bears. The Viking God Norse was also thought to have been a bear.

The bear claw footprint is also a symbol of literal, as well as a spiritual power in the cosmology of some indigenous peoples in North America. Sometimes, it is associated with particular clans or maybe organizations, so the bear, as well as its footprint symbol are more generally connected with the power of the animal itself, and also the summoning of spiritual power from some supernatural realms.

For other people, the print of the bear is a representative of courage, strengths, as well as protection, bravery, and motherhood. Those that have some deep spiritual connection with nature used the tattoo to remind themselves of which they came and where they eventually are going to be.

The bear claw is also an ideal tattoo for that person that has confidence, power, as well as is a fierce fighter, someone that does not give up at the first signs of trouble. Some choose the bear claw tattoos to show a tough exterior with a much softer, loving person inside. Others prefer this tattoo to represent love, as well as devotion for their children.

The hibernation habits of bears also remind some they are moving on from a time in their life to a new time full of possibilities, as well as promise.

Choosing this design helps people to be motivated each day to push forward, as spring is going to be right around the corner.

Cartoon character tattoos are always in trend, and