The Bo or sometimes Bodhi is a tree that can reach great size and age. It is known for being the tree under which Buddha sat when he attained enlightenment (Bodhi) at Bodh Gaya. It is held sacred by Buddhists. The Bo can be generalized as another form of the tree of Li. In early Buddhist art, the Bo tree has been used as a symbol for the Buddha since there were no likenesses or statues of him.

As we already said, the Bodhi tree is the symbol of the enlightenment of Buddha, and it is also the reminder of the ultimate human potential which lies within every one of us. The word ‘Bodhi’ in the Sanskrit language means ‘fully awake’ or ‘awakening.’ 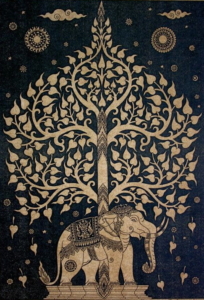 Some people also consider this sacred Buddhist symbol as the ‘World Tree,’ which is the mythical tree with its roots lie deep in the earth and branches supporting the heavens. The tree under which Buddha attained his enlightenment and awakening was an Asiatic religious fig or ficus religiosa.

The Bodhi tree as a symbol was already popular and sacred in India and is also revered in Bodh Gaya, where it is said the descendant of the original tree where Buddha experiences spiritual awakening still grows.

Some of the symbolic meanings that the Bo tree has are the following:

The Bodhi tree was symbolic of awakening long before Prince Siddartha Gautama entered the opening of enlightenment beneath its leaves in 528 B.C. even before the spiritual expansion of Buddha sparked the revolutionary religious teachings of Buddhism, the Bo tree symbolism was also associated with Vishnu, who is the major archetypal Hindu god. Vishnu is the sustainer of the universe, as well as part of the holy trinity with Brahma and Shiva completing the divine triad. Also, the Bo tree was considered the source of energy for this Hindu god.