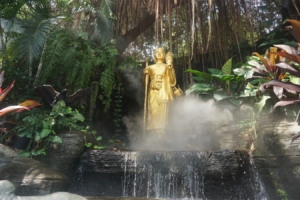 Buddhism, like the other great religions of the world, uses a system of symbols that echoes and reinforces its basic tenets. The Buddha discouraged the use of images, but over the centuries, a variety of forms have entered Buddhist iconography, including the Buddha.

Derived from Sanskrit, the word Buddha translates into “The Awakened One.” Believed to have reached a state of Enlightenment known as “Bodhi,” Buddha taught “Dhamma,” which is the state of righteousness and truth found in every human being and the universe.  Essentially, a tattoo of Buddha represents these truths, although there are variations that change the meaning as a whole.

Symbols also are here to testify and to show us about this religion like all the other symbols in the other religions. In Buddhism: Bo Tree, Mala, Stupa, Buddha, Om, Vajra, Buddha, Fat, Mane Padme Hum, Dharma Wheel are here to show us and tell us the story. The story of the meaning of Buddha and Buddhism.

The life of the Buddha

The Buddha was born as an ordinary human being – Siddhattha Gotama, by name – a member of the Sakya clan. He ruled a small kingdom in north India bordering onto present-day Nepal. It seems he was destined to become the ruler there. At the age of 29, he had become so concerned with the problems of humans and their suffering that he renounced his princely life in the search for an answer. So, as the story goes, he became a wandering ascetic, much like the ones which can be seen in India to this day, and he placed himself under the guidance of the famous masters of the time. he trained so well that he came to be recognized as their equal, but he had not yet attained the answer to his all-consuming problems.

A Buddha tattoo includes the face of smiling(laughing) Buddha, Buddha in meditation, or Buddha seated. Although not as common in Western culture, Thai, Japanese, and Tibetan cultures all show many depictions of Buddha walking or standing, each with their meaning. Typically, the legs of seated Buddha are in the Single or Double Lotus Pose, while the hands are in various positions to show Buddha’s purpose or life story.

Just as Buddha statues in various states offer differing symbolic meanings, tattoos of Buddha are equally as significant in their essence. There are more than 100 variations of the Buddha tattoo, each portraying a particular aspect of the life of Buddha. For instance:

–Buddha Calling the Earth to Witness – This depiction of Buddha is common in Thai culture, showing Buddha seated with crossed legs. In this pose, the left hand of Buddha is in the lap, and the right hand points to the ground, palm inward. This tattoo symbolically represents “The Moment of Englightenment.”

–The Medicine Buddha – This particular portrayal of Buddha is very common in Tibetan culture, showing Buddha with blue skin, right hand down, and a bowl of herbs held in the left hand. The symbolic meaning of Medicine Buddha relates to “Health and Wellness,” typically those seeking health.

–Teaching Buddha – Another popular Buddha tattoo that shows Buddha with legs crossed, one had to depict an “O” with the fingers and the other hand palm up. This symbolically represents understanding, wisdom, and fulfilling individual destiny.

–Walking Buddha – While most depictions of Buddha portray

–Buddha seated –  there are actually many poses of Buddha standing that hold significance. In this position, Buddha shows the right foot behind, one arm by the side, and the right hand raised. This tattoo is symbolic of grace and the beauty found within.

–Nirvana Buddha – Also, a very popular representation of Buddha, this pose shows Buddha in the moments before death. In this pose, Buddha is lying on the right side, upon a table. Symbolically, this tattoo represents reaching spiritual Enlightenment and escaping the cycle of death and rebirth, entering Nirvana.

–Meditation Buddha – Popular in Japanese culture, as well as others, this likeness of Buddha shows the legs crossed in a seated position, with hands together in the center of the lower abdomen. This tattoo symbolically represents the search for peace and serenity in one’s life.

As the fourth most common religion in the world, depictions of Buddha are found in temples and shrines across the globe. Gaining popularity in the West, likenesses of Buddha are becoming more common and found on everything from traditional art to body art.

The Essence of a Buddha Tattoo

The crux of a tattoo of Buddha – one of truth and hope. Fears, joys, love, jealously – these conditions simply are, rather than being “good” or “bad.” While all human beings share elements of the same life path, each travel and journey is different and unique. All people have free will to walk their own path, and each person can reach Enlightenment.

Why people choose a Buddha or Buddhism tattoo?

A person who wears a Buddha sign or an actual Buddha tattoo is( as we can say) searching for ultimate truth in his life, rather than seeking truth concerning the rules of men or God. Many people considering a Buddha tattoo have gone through a rebirth of their soul in some form, often through trials or challenges in their lives. Those individuals who get this type of tattoo designs are compassionate, open-minded, and accepting of others, recognizing all life as a beautiful journey.

A tattoo of Buddha is deep, personal, and should always reflect the story of one’s own life. The Buddha tattoo offers versatility, which means that no matter what stage of Enlightenment a person might find themselves in or what parts of the spirituality one persona faces, there is a pose of Buddha to represent it. This makes the Buddha tattoo unique and truly essential and symbolic to the individual, just as the reason why they choose to get it in the first place. In recent times some people don’t even connect with Buddhism on a spiritual level but still select these types of tattoo designs. The main reason for that is Buddhism’s profound and deep symbolism that can touch various kinds of people from different religions.