The figure of a bare-chested, bareheaded, as well as smiling fat man, is the Chinese Mi-lo, who is also an incarnation of Buddha. Also, as with so much of Chinese culture, he has a counterpart in Japan who is called Hotei, who is also one of the Seven Gods of Good Fortune, who is believed to bring peace and prosperity. Hotei is also the good of happiness, laughter, and the wisdom of contentment, and is the patron of the weak and children, fortunetellers, as well as bartenders. Hotei is usually distinguished by his body of generous proportions and round stomach exposed beneath loose robes. His big belly is also a symbol of happiness, luck, as well as generosity. 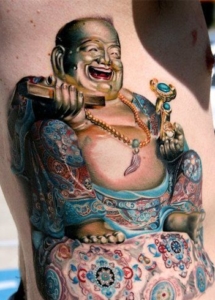 Some other names which he has are Budai and Pu-Tai, and this figure is a semi-historical monk and deity that have been introduced into the Zen Buddhist pantheon. He probably lived around the 10th century during the Liang Dynasty. His name translates “Cloth Sack” and refers to the bag that he is carrying as he walks freely. With his bag of presents, he is often surrounded by children, and he is a symbol of carefree bliss.

His jolly nature, as well as humorous personality and eccentric lifestyle, distinguish him from most of the Buddhist masters of figures. He is almost regularly shown smiling or laughing, as his nickname in Chinese, the “Laughing Buddha.” The main textual evidence pointing to Budai resides in a collection of Zen Buddhist monks’ biographies, which are known as the “Ching te Chuan Teng lu,” also known as the Transmission of the Lamp.

At his death somewhere between 901 and 903, he recited one poem which revealed to everyone that he was, in fact, the Bodhisattva Maitreya in cover. Maitreya, as Chinese Buddhists believe, is the future Buddha, who is going to return to the world and is also going to bring innumerable individuals to salvation.