Home
Blog
Daikoku, One Of The Seven Gods Of Good Fortune

In the mythology of Japan, the Seven Lucky Gods, or also called Seven Gods of Good Fortune, are believed to grant good luck and usually have their place in netsuke engravings or some other representations. Amongst the seven, not all of them are mythical characters, as there is one that is a historical figure. For more than a thousand years, the gods were recognized as such by a large number of followers. In the start, these gods were worshiped by merchants as the first two gods, Ebisu and Daikokuten or Daikoku, were the gods of business, as well as trade.

They all started as remote, as well as impersonal gods, but after that, they gradually became much closer canonical figures for several professions and even Japanese arts. During its history, the mutual influence between the gods created confusion about which of them was the patron of several professions. The worship of this group of seven gods is also because of the importance of the number seven in the country, which is supposedly the bearer of good luck and fortune. 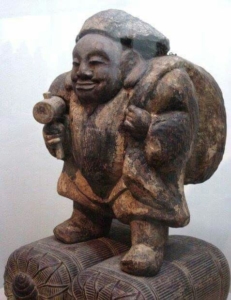 It is known that the deities have their origins in ancient gods of fortune: from the Hinduism practiced in Nepal and from the Chinese Taoism and Buddhism, except for one of them, who has Japanese ancestry.

In this article, we will talk about Daikokuten, or also known as Daikoku, who is the god of commerce and prosperity, and its use as a tattoo design.

Daikoku, also known as Daikokuten, is one of the Seven Gods of Good Fortune in Japan, and it is considered the god of wealth and the guardian of farmers. It is famous for bringing food fortune and prosperity to those that believe in him.

Daikoku is also the patron deity of artisans, farmers, craftsmen, as well as millers and business persons, financiers, and bankers, and he is also called Shichi-fuku-jin. Together, the Seven Gods of Good Fortune oversee the material and physical well-being of people and have come to be honored around Japan.

This god enjoys an elevated position as a household deity in Japan. The association of Daikoku with wealth, as well as prosperity, precipitated a custom known as fukunusubi or theft of fortune. This custom started with the belief that whoever stole the divine figures was assured of good fortune if not caught in the act of stealing.

The year-end market held also became the main venue of the sale and disposal of such images by the fortune seekers. A lot of small stalls were opened where articles, including the images of this god, were sold on New Year’s Eve celebrations.

Daikoku is variously seen as the god of wealth, or the household, especially the kitchen. He is often recognized by his wide face, smile, as well as a flat black hat. He was often shown as a fat and happy man, carrying a wish-granting mallet in one hand known as the mallet of fortune, sometimes used to strike gold from the Earth, and a large bag of treasures slung over his shoulder in the other hand, as he sits on two bags of rice. Rats sometimes nibble at the rice, further emphasizing the theme of prosperity.

The image of Daikoku was featured on the first Japanese banknote, which was designed by Edoardo Chiossone.

Curiously or not, Daikoku is also said to be the demon hunter. According to some legends, one of the Japanese gods of good fortune, Daikoku, hung a sacred talisman on the branch of a tree outside in the garden and using it as a trap, he could catch a demon.

As we already mentioned, he is most recognized and characterized by his smile, and he also has short legs and wears a hat on the head.

Daikokuten originated as a syncretic conflation of the Buddhist death deity Mahakala with the Shinto deity Okuninushi. Both of the names, the Japanese name Daikoku and the Hindi name Mahakala translate to Great Blackness. According to the Butsuzozui compendium of 169, Daikoku may also manifest as a female that is known as Daikokunyo.

Just like a lot of deities and god from different religions and cultures around the world, this god of the Seven Gods of Good Fortune, named Daikokuten or also called Daikoku, was a motif for a lot of tattoo designs in the past, but even today.

Tattoo lovers, as well as followers of the gods who recognized them, are usually inspired by the seven Japanese deities, particularly because of their symbolism. So, as it is the god of good luck and fortune, prosperity, and wealth, as well as commerce, it was a common tattoo among those that were interested in all this. In the beginning, it was the most common symbol among merchants, but after that, it became well known across Japan.

In Japanese tattoo art, The Seven Gods of Good Fortune are also sometimes shown together, forming part of a larger piece or tattoo design, or they can also be integrated into a bodysuit.