Death is something that we all need to face one day. The responses of people to death are different. Some people are afraid of it, while others are not. However, what is it that scares us about it?

The thought of death isn’t a pleasant one, and many people avoid such morbid musings. They naturally choose to focus on what life has to offer and on their goals and wishes instead.

“In this world, nothing can be said to be certain, except death and taxes.”

That is why worries related to death sometimes take us by storm. There is even a term for fear of death, and it is thanatophobia. The term derives from the ancient Greek words Thanatos, the name of the god of death, and Phobos, meaning fear.

These motifs are commonly used in tattoo art, and one such is the Grim Reaper or the Angel of Death. Mortality was a part of the world since its inception. However, the association of the Grim Reaper with death started only in the late 14th to the early 15th century. 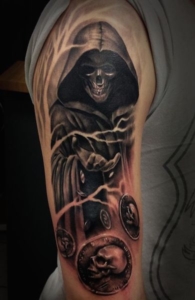 At that time, the world saw death like never before in the form of plagues, wars, and famines as well. This skeletal form, wearing a black cloak, became the symbol of the end of life. Nowadays, it still finds its uses with the same symbolism.

Nothing can wake up the fear in the hearts of man like coming face to face with the Grim Reaper. This is part of the allure many-body ink lovers like about getting the Lord of Darkness inked on their bodies. It makes other people fearful and uncomfortable. The Grim Reaper is a meaningful and highly symbolic tattoo design, as it represents dark work and dying.

The Grim Reaper is, quite simply, the symbol of death itself. Depicted as a hooded and caped skeleton wielding a giant scythe, he comes to “harvest” human souls with his tool. He is the personification of death as it approaches and a reminder that no one escapes him in the end.

The Grim Reaper is highly symbolic, as well as a meaningful tattoo design. Here, we are going to discuss some of those meanings that this bold and dark design carries.

The Grim Reaper is also called the Angel of Death, and it became prominent in folklore during the Middle Ages. It is the symbol of dark and death, and these tattoo designs are more popular among men.

It is commonly present in ancient arts, movies, and tattoos for many years. People that have these tattoo designs want to show the world that they are not afraid of the “end to come”. They also want to show that they have no fear of evil.

Sometimes, the Grim Reaper tattoo can also be the symbol of good luck, bravery, as well as courage. Some people choose this tattoo design to represent the cycle of life from birth to death. Grim Reaper tattoos are the symbol of memory of dear ones after they died. The scythe is always present in this tattoo design because it is his symbolic image.

Even though the Grim Reaper commonly represents death, he can take on a lot of other meanings.

Some of the most common meanings and symbolism associated with this tattoo design are:

Just like we already mentioned, the Grim Reaper may also represent the circle of life. In that way, we show that we understand that life and death happen to every one of us. Our mortality is something that we are all going to face one day.

He can even represent courage and bravery, showing that we aren’t afraid to die or meet our faith. As a result of this, this tattoo can be commonly present among soldiers.

The Grim Reaper is also present in the Goth culture. There are people that love to have fierce-looking ink, regardless of the fact if it has symbolic value or not. The designs can include ravens, skulls, chains, flames, swirls, and a lot more.

The Grim Reaper even has many associations with different historical beliefs. There are also speculations present when it comes to its origin and history. Although most of its meanings are negative, it can be the symbol of good luck, which can be a surprise.

The Grim Reaper tattoos are old-school tattoo styles that are present for many years. There is a variety of different ways in which this tattoo design can be present. But, most importantly is that it has profound and specific meanings, which many of us can relate to.