Animals are a common motif in tattoo art. Buffalo is one of the most used animals in the tattoo culture, and it’s holding his position in different styles. While much of the animal imagery in tattoo draws its inspiration and meaning directly from the attributes of the animal being chosen, the American bison, which is commonly known as buffalo, is very much associated with the Plains Indians. It was a mainstay of their economy, providing food, as well as clothing, shelter, and tools. Can you imagine the awe, as well as the fear that the Native Indian tribes and some of the early settlers felt when they first saw these massive one-ton beasts roaming the plains of North America? 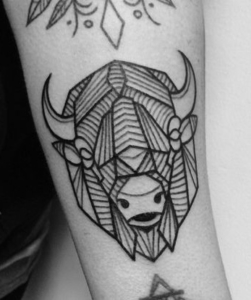 However, there are differences between bison and buffalo. While the two are related, they have a lot of different features. The first one is in their skulls. The American bison has smaller horns than buffalos, and it is often found wandering the plains of North America. On the other hand, buffalos roam the landscape of Africa, Europe, and Asia, and they are a keen feature in the lives of a lot of rural villages and their folklore traditions. They have prominent horns and are also domesticated, not like their American cousins. In rural areas in the world, buffalos provide nourishment for a lot of indigenous families.

The American bison is also a symbol of the intentional destruction of the way of life for the advancement of a dominant and expansionist American culture.

Thus, while buffalo occupied Indian mythology and ritual and is representative of these, it also now represents the legacy of the ruthless white population, as well as government, bent on usurping land and resources.

Tattoo lovers choose buffalo as an inspiration for their new tattoo for several reasons. By wearing a buffalo tattoo, they are highlighting that they are strong, and they highlight the spiritual connection with nature, as well as with this magnificent creature. Buffalos embody:

Also, there are countless elements that are usually incorporated into these tattoo designs, each of which adds character and flair to the artwork.