Invented in medieval China and is one of the earliest mechanisms of gunpowder artillery, the cannon has changed the shape of the world on both land and sea. Some people will say that it changed the way of warfare forever after.

Since its earliest arrival, it has also made its way into a lot of symbolic forms, featured in personal, as well as political and creative art, which include the world of ink. 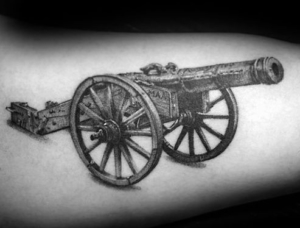 Military artillery, like the cannon itself, were used in warfare since the fifteenth century. Tattoo designs of cannon might carry particular meanings, like that of a war memorial or wartime service. Still, they are also part of the larger group of weapon tattoos of all sorts, which are in general meant to project strength, as well as intimidation.

Being more than an antiquated weapon of destruction, the cannon also represents a violent awakening and shift in circumstances.

Once when the cannon is fired, there is no going back; after the loud explosion, there is going to be the permanent aftermath. Here, the question is: Is the damage going to give way for something much more significant, or is it going to bring you down too?

The cannon is traditionally inked in matte black, and it is worn on the side of subtlety – scaled to the forearm or shoulder – it is a bold but straightforward testament of your service as a man. You are not one who is going to be taken down willingly or with ease, nor are you going to stand by while those that are innocent are attacked. Harmless enough when until, you know pretty well what a careless spark will ignite.

As we already mentioned, this tattoo design is commonly chosen by men, is a testament to their service as a man. It has been used in military artillery, and it has a long tradition.