Army tattoos are considered a source of pride for people both inside and outside of the military branch. There are now hundreds of different army tattoo designs that people can choose from. 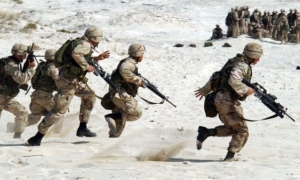 Emblems and symbols of army service are sacred to people who have dedicated their lives to performing that service. Due to that, it is not a surprise that many army tattoos are either these emblems or symbols, or they are included in larger army designs. Of course, it is crucial to know exactly what each one of the images represents before you get it tattooed on your skin.

The Army is a military branch that refers to soldiers whose service is conducted on land, rather than air or sea like the Air Force or Navy Reserves. This is why you will often see the soldiers included in army tattoos trudging along in the mud to bring focus to their work on the land. This can even be accomplished by simply adding dirt to the face of a soldier or by mudding up a helmet or other army symbol. The Army is an invaluable force that each country relies heavily upon to protect their rights and freedoms from tyranny. This is the reason why most of the army tattoos worn by military and non-military people will represent protection. It can represent that the owner of the tattoo takes pride in the fact that they protect those around them, or it could mean that the owner is honoring those who have protected their country. Many members of the Army decide to get tattoos to commemorate their service or comrades who have been lost and passed on.

This type of design can be done in many forms, totally depending on the person getting the tattoo and how much skin they want to ink up. Regardless of the design, though, you can be sure that these types of army tattoos are extremely meaningful to their owners, and they take a lot of pride in having them. Depending on the country, the national flag is most often included in the design to convey one’s pride in that nation. It usually takes the place of the background with additional symbols in the center or overlapping the flag image. In simpler designs, the flag is a flat rectangle, but some people take it a step further by having it “waving” on their skin.

In the United States, bald eagles and stars and stripes personify the American nation. They are often combined with the rifles or other weaponry, the initials of their platoon or squadron, or other insignia. These army tattoos can easily be modified to make them your own. If you wish that everyone knows that you wear an American army tattoo, then the bald eagle or stars and stripes can do the trick. The key is to make the design as “unique” as possible without overdoing it. The U.S. Army icon is also frequently used as a tattoo design, including a black square with a white star as well as a banner that says “U.S. Army,” traced in gold. This is a perfect choice for people who are looking for a smaller army tattoo or a small symbol to add to a larger design. It can also be a great shoulder tattoo as it does a wrist tattoo, so you definitely have more flexibility with the Army icon than you do with a lot of other army tattoos.

American people love tattoo designs that feature the Army because they usually are very proud of their military. It is no surprise that most army tattoos you’ll find online are American-themed. Most of them have obvious elements that are easy to identify, such as helmets, sometimes skulls, grenades, and more. Others have quotes about bravery and memory. There only a few variations among army tattoos, and they are in a big picture of serious character and respect.

Sometimes when a soldier falls during combat, his brothers take their gun and put it on the ground as a symbol similar to a cross. This tattoo resembles how the death of someone brings new life that can only exist thanks to their sacrifice.

Ripped skin represents another popular trend in tattoos, especially in army ones since it symbolizes how, beneath their skin, you can find the identity that brings them all together: being American.

This tattoo design symbolizes the death of a soldier. During the funeral of a soldier, they place a flag over their casket. At the end of the funeral, the flag is bent and given to the soldier’s family.

This quote is usually found in military tattoos and has a quite clear meaning; the presentation is the only thing that changes from tattoo and tattoo.