The number of animal tattoos is quite big. Almost every animal living on our planet finds its use in tattoo art. One such animal is the rat. Rats are specific small animals that have great symbolic meanings as well. Rats are also specific because of their presence in different artworks and cultures all over the world. 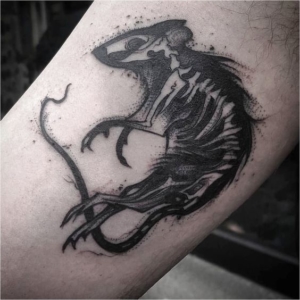 In the article of today, we are going to talk about rat tattoos, their meanings, and symbolism, and we will mention some characteristics of this rodent. If you are interested in getting a tattoo of a rat, keep reading and find something more about these animals.

Rats are different medium-sized and long-tailed rodents. Species of rats are present all over the order Rodentia. However, several stereotypical rats are found in the genus Rattus as well. Other rat genera include Neotoma, Bandicota, and Dipodomys. Neotoma is pack rats, Bandicota is bandicoot rats, and Dipodomys are kangaroo rats.

Rats are usually distinguished from mice by their size. Generally said, when someone discovers a large muroid rodent, its common name includes the term rat. However, if it is smaller, the name will consist of the term mouse instead. This animal is not a scientific term. If it were, all rats would then belong to the genus Rattus.

The most famous rat species are the black rat and the brown rat. This group generally called the Old World rats or real rats, originated in Asia. Rats are quite bigger than most Old World mice, which are their relatives. However, they seldom weigh over 500 grams in the wild.

The term rat is also utilized in the names of some other small mammals, which aren’t real rats. Some of the examples include the North American pack rats and a number of species loosely called kangaroo rats.

The common species are, in fact, opportunistic survivors and usually live with and near human beings. Therefore, they are called commensals. They may also cause substantial food losses, particularly in developing countries. But, the widely distributed and problematic commensal species of rats are a minority in the diverse genus. A lot of species of rats are island endemics, and some of them have become endangered because of habitat loss or competition with the brown, black, or Polynesian rat.

The symbolism of the rat is dual and, at the same time, curious. For example, in the West, rats are regarded as frightening, filthy, and insatiably hungry rodents. On the other hand, in the East, they may represent greed, but are more associated with fertility and numerous offspring, just like in Japan, China, and Russia.

For the ancient Hindus and Greeks, rats could bring and cure diseases. The rat in tattoo imagery seems to draw from all of these various associations, whether in Chinese Zodiac “Year of the Rat” designs, associated with the Japanese Daikoku; with the steed of Ganesha; or utilized in frightening motifs where they are furtively scurrying about.

Depending on the region in which you live, rat tattoos may represent a lot of meaning. Generally said, rats embody the following:

Rat tattoos are quite hard to find, as most persons aren’t quick to associate with the generally negative image that this animal has. However, for those who do, the most common designs highlight the defiant or the sweet nature of these small animals.

You can depict them as cartoons making obscene gestures or any element that may be incorporated into the artwork. You can do that in order to show off the innocent, but the still jovial side of the rat. If you want to overlook centuries of rodent misrepresentation, a cartoon rat tattoo design will be an excellent way to should your rebellious, but still comical nature. You can also let everyone know that you are not a pushover.

When it comes to choosing the right tattoo design, you have to remember several important things. First of all, you have to get a tattoo which has particular importance to you. Having a piece that speaks to your personality will ensure that you are going to wear your new tattoo with pride 20 years from now.

The second thing you have to remember is that you have to think about where you are going to place your new ink. The last thing would be to decide whether or not you are going to add other elements to the design. If you are thinking about getting a rat tattoo, then find some more information and see whether it will correspond to your personality or not. It all depends on you.