The zodiac is the main organizational structure by which the cosmos is understood in astrology. In Babylon, Judaea, ancient Egypt, Persia, India, Tibet, China, North/ South America, and Scandinavia, astrologers utilized the zodiac. Like the Western one, the Chinese Zodiac is also divided into 12 symbols. Chinese zodiac signs, however, do not correspond to cycles within the year like the western zodiac but instead to a long cycle of twelve years. Every year the zodiac sign will change, and every twelve years, it will repeat. According to the year you were born, you’ll share those features. 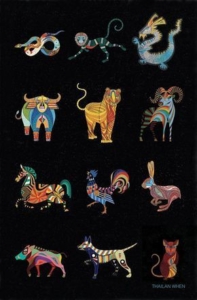 Ancient Chinese believed there was a strong relationship between human beings and the 12 zodiacal animals, which rule for a whole year and have an effect on each person’s personality traits. Now, why 12? Just as each year has 12 months, they noticed that each year also has 12 full moons, which made them believe that this number has a significant impact on life cycles. So, even if you’re not a believer in these things, each year represents an animal with quite positive qualities you can incorporate in your life, like loyalty, intelligence, and kindness. Besides that, there are many designs that can inspire you to get your Chinese zodiac tattoo..Take a quick look and see what your zodiac animal says about the year you were born.

– MEANING OF THE CHINESE ZODIAC SIGNS:

RAT(1912, 1924, 1936, 1948, 1960, 1972, 1984, 1996): The rat is the first symbol of the Chinese zodiac, and it represents someone popular, sophisticated, and social. Rats are intuitive, adaptable – the kind of friend or coworker you want with you during difficult situations. They have a strong reputation as businessmen. A rat is an intelligent person who can easily adapt to any circumstance because they learn fast and can foresee any possibility out there, not to mention that they’re charming and friendly persons, which makes it easy to seize any opportunity in life.

OX(1913, 1925, 1937, 1949, 1961, 1973, 1985, 1997): An ox zodiac tattoo represents more than a beast of burden. The ox is honest, level-headed, diligent, and persistent. Their strength and logical way of understanding life make them quite reasonable people who have their feet on the ground. They make exceptional leaders, boasting leaders like Barack Obama and Napoleon.

TIGER(1914, 1926, 1938, 1950, 1962, 1974, 1986, 1998): A tiger zodiac tattoo represents someone courageous, independent, and powerful. They often have outstanding leadership skills that, together with their confidence, charisma, and enthusiasm can make people around them follow them without any doubt. A tiger tattoo can wear someone smart, loyal, overcome hardship.

RABBIT(1915, 1927, 1939, 1951, 1963, 1975, 1987, 1999): A rabbit zodiac tattoo represents an ideal partner – a strong friend and romantic in partnership. These are believed to be social and sensitive people who, due to their empathic way of living, are natural caretakers. They’re honest and great listeners. The rabbit tattoo represents a gentle, compassionate soul

SNAKE(1917, 1929, 1941, 1953, 1965, 1977, 1989, 2001): In the Chinese zodiac, the snake is not an evil or malevolent symbol. They tend to be more organized and thoughtful characters looking for the best way to act. Also, due to their quiet way of living, they tend to be more attentive to details and to what others do to see what’s best for them, so they know when to seize the best opportunities. A snake zodiac tattoo can wear someone funny, sensitive, and artistic.

GOAT(1919, 1931, 1943, 1955, 1967, 1979, 1991, 2003): A goat zodiac tattoo signifies someone compassionate, wise, and considerate. They focus more on the beauty of life and will try to base their lives on the visual aspects of it. They’re elegant and tasteful people that know how to use their charm to captivate anyone. A goat tattoo is not a pushover, and it demonstrates that the bearer is attractive, clever, and persistent.

MONKEY(1920, 1932, 1944, 1956, 1968, 1980, 1992, 2004): Bearing a monkey zodiac tattoo represents intelligence and a bright mind. They’re skillful, loving, and friendly. They’re charming, funny, and lively persons who can adapt to anything through their sense of humor and positive way of living. They’re also quite smart and versatile so, having one around is also great to bring some fun and spontaneity to your days.

DOG(1922, 1934, 1946, 1958, 1970, 1982, 1994, 2006): Bearing a year of the dog tattoo indicates a loyal character that is sincere and decisive. Though playful and energetic, dogs are also courageous and responsible. Their main characteristic is that they’re a bit territorial, and for that reason, they adapt their surroundings to what is best for them. They’re smart and brave beings who will put their loved ones before anything and anyone else, even themselves.

PIG(1923, 1935, 1947, 1959, 1971, 1983, 1995, 2007): The pig zodiac tattoo comes with several positive characteristics. They are generous, merciful, and considerate. Despite their depiction as lazy, they are forgiving and pure of heart. They care about everybody and tend to do a lot of philanthropic work since they’re determined to make the world a better place for everyone. They’re extremely friendly and charismatic people who know how to be empathic with anyone.

I hope that this information is helpful if somebody wants to design a Chinese zodiac tattoo.