The Celtic cross is widely recognized as a design that represents the cross of Christ. Even though no one can say with certainty how the circle that surrounds the center of the Celtic cross came to be, there are several theories. Some people claim that the circle represents the Roman sun-god Invictus, making it a blend of pagan and Christian symbolism, sometimes referred to as the Celtic Sun Cross. Others claim it represents the halo of Christ. Regardless of the origin of this Christian symbol, it has found its way into the Celtic artwork and is often depicted in tattoos.

There are several variations of the Celtic cross tattoo; however, the basic design includes a cross with a tall vertical tier with two shorter arms to the sides. Such a model of the cross is similar to the traditional depiction of a Christian (Latin) cross or crucifix. It also includes a circular motif that surrounds the center where the arms meet. These cross tattoo designs tend towards being ornate and can consist of other design elements, like shamrocks or interwoven knots. Some even resemble tribal tattoos.

What Does this cross Tattoo Mean?

It is believed that the Celtic cross originated in the 5th century. Although it is considered as a famous symbol of faith, it also represents Celtic heritage. This symbol was prevalent in Celtic communities, such as Scotland and Ireland. Nowadays, this cross serves as a symbol of Christianity and religion. All Celtic symbols, including the cross, come from the Book of Kells. This illuminated book was created by the artistic monks after 500 AD. These illustrated manuscripts and Celtic art survived the test of time. These days, it is recognized as the most popular tattoo art designs in the world.

Many people decide to get a Celtic cross tattoo for its alluring beauty, but there are some common meanings associated with the Celtic cross. The most common are:

For some people, this tattoo design represents Irish heritage, while for others, tattoos of a Celtic cross are religious tattoos. 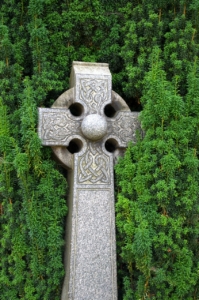 The Symbolism and Meanings of the Tattoo Variations

Celtic cross tattoo is one of the most popular designs in the world, and at the same time, it is highly demanding Celtic tattoo designs. These types of tattoo designs can be portrayed either as Celtic cross alone or combined with other elements or symbols. In this Celtic cross tattoo design, the cross is combined with a ring surrounding the intersection. These types of crosses can be found in the significant parts of Celtic art. Even though this symbol originates from the pre-Christian era, it is the characteristic symbol of Celtic Christians. This design is also referred to as an Irish cross.

This cross design is typically placed in a visible location, such as the arm or leg, but it can be placed on the side, chest, or back.

There are many reasons for getting a Celtic cross tattoo. You may choose one because you or a loved one has Irish roots, you wish to express your Christian faith, you are seeking spiritual enlightenment or simply because they are intricate and beautiful designs.