Sometimes, it is hard to find perfect tattoos with profound and beautiful meanings. Most of the people, if not all, want something permanent on their body to mean something deeply and beautifully, but how can they choose a tattoo which is still going to be important in 5, 10, 15, or 50 years? Crystals and gemstones have a lot of healing properties and abilities, and they are great energy; also, each of them has a definite meaning. The most common crystals are ones such as diamonds, topaz, and rubles. 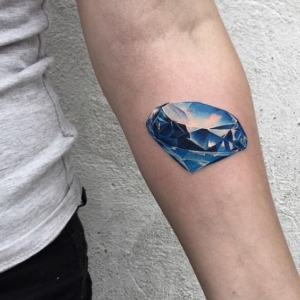 Over time, a lot of tattoos have lost their stigma, and a lot of people consider them a form of art, but there is still the possibility to get a tattoo which you are going to regret, if not after a year or so, that is going to happen one day for sure.

It is common for people to share tattoo themes, just in the same way as they share names. Whether they are nautical themed tattoos or some tribal tattoos, there are certain images to which a lot of people strongly relate to. Why is that we gravitate towards the same themes? Well, for the most part, every one of us is to build the same. Every one of us loves, laughs, hurts, or experiences the same emotions, although we sometimes take different roads to get there.

Also, while we share experiences, every one of us expresses their experience in a unique way. Regardless of the reason for your tattoo, it will always be a great thing to learn more about the meanings that stand behind the great symbols of our time and ancient times, too, so that you can be inspired to put a unique spin on your design. Today, we are going to present you one interesting tattoo, the crystal tattoo, which a lot of people who believe in the healing powers of crystals, tend to choose it. Below, you can learn more about the crystals and tattoos of crystals.

Crystals have some unique properties that they possess surprising integral strength of the structure. For example, putting the crystal under the rays of the sun, the glare is going to play on the stone, emitting a bright light. As of this phenomenon in ancient times, people often worshiped the crystals, and they associated them with the Sun God. Buddhist people invested in crystals and their healings, symbolizing spiritual beginning.

Crystals have held a fascination for human beings from the earliest of times, most usually associated with spiritual and supernatural powers. A crystal embodies not just the material and the solid, but the immaterial and transparent too, combining the two as little else in nature.

Each crystal has its own authentic, energetic, as well as metaphysical properties. You are going to find that when you are attracted to a certain crystal, it is going to contain the emotional and physical support that your body needs. Just like our lives change, the crystals to which we are attached will also change.

The crystal tattoos were rising in popularity for some time. There is something mystical about them that attracts a lot of people. Their meanings can also vary from one stone to another. For example, rose quartz and its associated healing properties mean it’s a stone of peace and love.

Crystal tattoos are usually chosen by those that are solid and determined, and who know the worth of the crystal itself. Usually, a stone image on your body will seek to attract good luck and fortune.

For a long time, crystals are symbols of divination and wisdom, as well as spiritual insight in general. Nowadays, they figure in New Age spiritualism and are utilized to promote health, as well as healing, not like the shamanistic uses to which they were put prehistorically in different societies.

Tattoos of crystals are almost always in conjunction with some other spiritual or also religious elements, and they take on the cooler and more common crystal colors from white to purple.

Crystal tattoos also carry a lot of energy. As we already mentioned, there are a lot of different crystal types, and each of them has an individual meaning. Even though the most common types are the diamonds, rubies, or topaz, there are also commonly used crystals. Those people that have crystal tattoos on their bodies usually know a lot about crystals, and they believe that they work like a charm and attract good luck.

Crystals are also the strongest and most resistant materials on our planet. As a result of that, they become a symbol of eternity. This perception also comes from the reflection of the crystal, which we already mentioned before.

In a lot of legends from around the world, the crystals appear with the heroes as a symbol of immunity from destruction. So, since those times, a lot of people believed that crystals have some strange powers. Because of that, they also carry them as amulets for protection and good luck, despite taking tattoos of them.