If you are interested in doing an interesting and simple tattoo with deep meanings, you can see that there are lots of options. This is because, in the world, there are thousands of small symbols with big messages. The equal sign is one of those interesting symbols that have gained popularity in the world during the past few years, and it’s here to stay. The reason for its popularity is because we are in a time in history when people are craving for equality. There are many of us that are prepared to help them accomplish what they deserve. Every person on our planet has the fundamental right to equality, and now that more and more people are aware of that across the world, the fight is getting stronger every day. 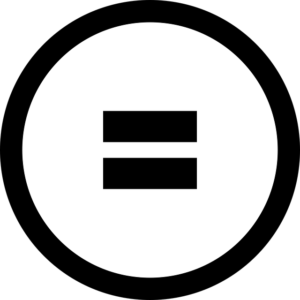 One way to support this fight is by getting an equal sign tattoo. By getting this tattoo, you can support the cause of many in a small symbol. People who understand this have chosen the equal sign as a tattoo because they know its significance. Most people probably think this image is just a way to get a total to a math equation, but the reality is different.

In the present time, the equal sign is used as a logo for the Human Rights Campaign, and it has been turned into one of the most identifiable symbols in the world for bisexual, gay, transgender, queer, and lesbian groups and communities. Around the world, this sign has become the symbol for the LGBTQ equal rights, more specifically, the United States.

1995 is the year when this logo was officially revealed, and it helped this organization start fresh. Although known as the Human Rights Campaign Fund now, it has started to move toward new goals. The group was founded in 1980, and during that time, it was used to represent congressional candidates that were pro fairness. After the rebranding of the company in 95′, they started using a new message that affirmed the firm was far more than just a fund; it was a movement.

The equal sign logo was just the thing that was needed for the restructuring of the Human Rights Campaign. To add to the political action capabilities and the well-established lobbying, there were new projects like Family Project and Workplace Project attached to the cause. Everything in the program was improved, including their marketing, communications, public relations, and research programs. The logo is a symbol of what the group and all that support it are trying to achieve.

The equal sign logo, alongside with the name, is an expression of bigger authority and goals and has now started spreading the word to every part of the nation.

The main reason why this logo is used was to send a message even when nothing was being said. After that, whenever people saw an equal sign, they no longer thought about just answering a math question, but they had in mind all those in this world that weren’t receiving the same freedoms as the majority.

In most cases, you can see a red equal sign logo, and this is a representation of love. The first time this was released was in March of 2013 when the Supreme Court heard two cases involving marriage equality. For that cause, people were asked to give their support on social networks like Twitter and Facebook by replacing their profile pictures with an image of an equal red sign. This was the period when the campaign went viral. There were many celebrities like Martha Stewart, Beyonce, and George Takei, who helped the movement draw more eyes with their use of the sign on their social media platforms. From there, millions of people began using the symbol and sharing the idea.

When it comes to the equal sign tattoo, it can be tattooed in any color and inked wherever you want it. If you want to address those issues that need to be addressed, the equal sign tattoo is a great way to do this. An additional reason to choose this tattoo is that it looks great almost anywhere on the body. For instance, it can be inked on fingers, biceps, and backs. If you want it, it can be as small that only those people that you allow would be able to see it. It can also be big and bold, ready to make an impression on the world.

The owner of this tattoo has the last say about where to place the tattoo and how to color the equal sign will be tattooed. There are some people who choose to get a black and white tattoo without drawing too much attention. Other people decide to get the equal sign tattoo inked in bright colors and even rainbow colors to symbolize the gay movement in a more obvious way.

No matter what kind of equal sign you end up choosing for your tattoo and for what reason, the most important thing to remember is that this small tattoo has a very deep meaning.

The tattoos known as they hear no evil,