When we decide to get a tattoo, we have to research and choose carefully. We should do that because we are going to live with it for the rest of our lives. Most of the time, we choose something which seems appealing to us or which has various meanings. Usually, we love tattoos, which are entirely symbolic, and which meanings we can describe when someone asks us. But there are tattoos which aren’t full of symbolism; they are simple, fictional, and we choose them because we like them.

Maybe choosing our tattoo is going to be hard work, especially if we don’t know what we want. However, when we finally choose it, we have to research, in order to see what does it symbolize and mean. We should do that to avoid conflicts and confusion because the beliefs of every person in the world are different. We should do that in order to avoid hurting other people’s feelings, especially when the tattoos are associated with religion. 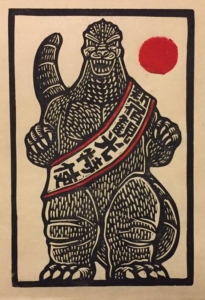 However, there are many tattoo designs that don’t associate with religious matters or other different matters. They simply have identical meanings and symbolism in every tradition and culture in the world. Such tattoos are fictional creatures, such as dinosaurs or monsters, which the human mind created.

One such creature is the Godzilla, which is a fictional dinosaur-like creature, which Toho Co., Ltd., Studios of Japan created during 1954.

Godzilla is a fictional monster that originates from a series of Japanese films of the same name. The character appeared for the first time in the film of Ishirō Honda, titled Godzilla, and became a pop culture icon around the world. It appeared in different media, including the 32 films that Toho Co., Ltd., Studios in Japan.

Godzilla represents an enormous, prehistoric, and destructive sea monster, which the nuclear radiation awakens and empowers. With the nuclear bombings of Nagasaki and Hiroshima, and the Lucky Dragon 5 incident still fresh in the Japanese consciousness, Godzilla became the metaphor for nuclear weapons.

With the expansion of the film series, some stories took on less serious undertones, portraying Godzilla as an antihero. They even considered it a lesser threat defending humanity. When the Cold War ended, a few post-1984 Godzilla films shifted the portrayal of the character to different themes. Such themes included the forgetfulness of Japan over its imperial past, the human condition, and natural disasters.

Godzilla continuously found its place alongside many supporting characters. It even faced some human opponents like JSDF, or other monsters, including King Ghidorah, Gigan, and Mechagodzilla. Godzilla sometimes has allies like Mothra, Rodan, and Anguirus, and offspring like Godzilla Junior and Minilla. Godzilla even fought characters from other franchises in crossover media.

This rampaging and an unstoppable giant monster is a fictional dinosaur-like creature that survived in modern times, although atomic radiation mutated it. Over the course of a multi-film career, its character and image changed radically.

Godzilla is the icon of the terror which smashed through Tokyo buildings regularly. It even serves as a warning about the unforeseen consequences of modern science. He even became the unlikely hero and champion of humanity against other giant creatures.

Those people that wear Godzilla tattoos are probably projecting something primal and ferocious. However, there is even a sense of fondness for the B science fiction movie era.

Godzilla is the most famous cult hit in the world, and this giant Japanese beast always makes a killer tattoo. In order to exude godly magnificence with mighty ease, you should let your reptilian instincts come to life with a terrifying Godzilla tattoo.

This legendary fictional monster is going to defeat all other body art alternatives, as it will employ the finest fatalistic finesse. Godzilla tattoos may mean more than what they seem. Still, regardless of the meaning of your Godzilla tattoo, you can ensure that you will always have something to show the world.

However, this creature is not always a scary demon as the series are representing it. It can be a nice and beautiful creature, which can symbolize protection against the unforeseen circumstances a situation can bring.

If you are a lover of vintage charm or retro action, then the Godzilla tattoo will be excellent for you. Of course, Eastern sensitivities can also be present in different concepts.

We can say that Godzilla is one of the most recognizable symbols of Japanese popular culture around the world. It remains an important facet of Japanese films until nowadays. Audiences always respond positively to the character as it acts out of rage and self-preservation.