There are many video game tattoos that revolve around the originals like, for instance, the Mario Brothers, Zelda, or the one and only Pac-Man. However, we are starting to see an astronomical rise in the popularity of video games after the creation of an online play, like Twitch and other streaming options. Nowadays, anyone can watch another person play video games.

With the rise of today’s games, the original gamers end up with grasps from the past and sometimes even decide to get games from their childhood tattooed on their body. These games are nostalgic for older people, and getting a tattoo of the favorite Nintendo or PlayStation game will give them somewhere to look if they need to go to their happy place. We can also notice that the new generation of games is being tattooed as well. One thing that we can state with certainty is that video games aren’t going anywhere. New and better systems will be released yearly along with better games. Future generations will continue to play these games, and once they can, they might get a tattoo to represent their favorite one.

Since the early 1970s, video games are part of our everyday life. Computer Space was created by Nutting Associates in 1971 and was the first commercial video game of its kind. Then Atari’s Pong appeared in 1972. When we talk about Atari, there is one thing worth mentioning is that it was created by Nolan Bushnell, the developer of Computer Space.

In that same year, the Odyssey was released by Magnavox introducing the first game system that could be played at home. This game system was extremely limited since it required a plastic overlay to be put over the screen of the TV and only produce simple graphics.

After in 1975, Atari introduced the home version of Pong, which was a huge success, this was the beginning of the next wave of gaming systems. After that, the gaming industry has only flourished into some of the most intricate and beautiful games and systems you can imagine.

When it comes to video game tattoos, below are the design ideas of a few of the most popular ones we have seen out there.

The Mario Brothers game was created by Nintendo for arcades in 1983. This was one of the first games released for the Nintendo home play and, therefore, brings back a lot of memories for those who had the Nintendo gaming system.

The story of the arcade version includes two plumbers named Mario and Luigi, who investigate the sewers of New York after the appearance of strange creatures down there. The point of the game is to get through all enemies on each stage. In contrast to the future Mario Brothers games, you couldn’t jump straight on an enemy unless they were already flipped upside down.

If you look through some gaming tattoo designs, you’ll be sure to see some Mario themed tattoos as this game was somewhat of a pioneer in the video games.

This is another game that could be played on Nintendo set in the land of Hyrule. The story of this game revolves around a young boy named Link. The purpose of the game is to save princess Zelda from Ganon and to do that, and you must collect the eight fragmented pieces of the Triforce of Wisdom.

This 1986 release is considered as one of the most popular Nintendo games (or any gaming system) of all time. It was a best seller for Nintendo because it was sold in around 6.5 million copies. It’s no surprise that this game makes a fitting video game tattoo since it is believed to be one of the best and most influential video games ever so. With so many images to potentially use in this game, The Legend of Zelda is popular in the tattoo world as well.

Bioshock is a relatively new game when compared to the previous two we talked about. The game first aired in 2007 for Xbox 360 and Microsoft Windows and later was released for PlayStation 3. This game continues to release new versions to be played and is one of the more popular ones as a tattoo design since there are numerous recognizable images from the game. 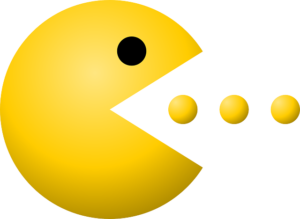 BioShock is a first-person shooter game set in the 1960s. In this game, the plot includes Jack’s crash of his airplane in the ocean landing by the bathysphere terminus, which takes him to the underwater city of Rapture. The city was created in the sense of an underwater utopia, but the discovery of a substance that gives people superhuman power leads the city to its downfall. The story follows Jack’s attempt to escape.

Pac-Man is considered as the most iconic arcade game ever existing. Every generation knows what Pac-Man is, and since its release in 1980, the gaming world was never the same. The game includes a very simple concept in which a pie-shaped character moves around a maze eating dots and avoiding ghosts. No matter how simple this game is, it is one of the most addicting and challenging games than others. As a tattoo design, Pac-Man tattoo is legendary for gamers and will be recognized by anyone that hasn’t been living in a bunker their whole life.